Posted on October 10, 2016 by Fiction Aficionado 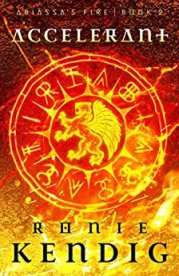 Publisher’s Description:
The Nine Kingdoms bleed. Leaderless, ravaged, the land awaits deliverance from Poired Dyrth’s devastating campaign. But what if one blight can only be cleansed by another?

The promised Fierian is known by many names. Judge. Destroyer. Scourge. And now one other: Haegan, Prince of Seultrie. Once a cripple, now a gifted Accelerant, Haegan can no longer run from the truth. But neither can he be reconciled to it. He knows only one thing for certain: as the only able-bodied heir to the Fire Throne, he must return to the Nine and fight for his people.

But there are insidious forces at work. When reality itself falls into question, Haegan struggles to know where to fight, whom to trust. Caught between duty to his country and duty to the world, Haegan must see clearly enough to choose the right path to save the world.

“My king,” Grinda’s voice boomed.
“General,” Haegan said, turning toward the commander of the Seultrian armies – and stopping short.  “I would ask that you not use that title with me yet.”
“You are my king, whether you wear the crown or not.”  Grinda held up the Fire King’s dark red mantle and cloak that changed color – from orange to gold to white – with the intensity of Flames being wielded.  Clasped in his right hand was the gold circlet carved with flames.  Not the simple one he’d borrowed from the Thruigs and worn at the wedding.  The Fire King’s.
“Nay.”  Haegan started for the reins of the destrier Praegur held.
“Sire, you are-”
“I am not crowned nor have I won the Contending.  I have no right to wear those.”
“As Zireli’s son, it is not only your birthright but your duty!”
“I can’t.”
“You will,” Ginda growled, stomping forward, the mantle and circle held with respect.  “Think not for one spark that this is about you, boy.  This is about Seultrie.  It is about Abiassa.  It is about an evil so dark and so great people forget to breathe.  You are blood-born of Zaelero and Zireli.”  Trembling with barely controlled passion, he shoved the piece against Haegan’s chest.  “Put it on and embrace what you must – for your people.  My people.  Think the Jujak will follow a boy, whimpering in his leather, when they face the Desecrator reborn?”
The scalding lecture seared away Haegan’s petulance.  Heart thundering, Haegan felt more the boy who’d lain in a bed listening to Grinda’s spectacular tales of conquest.  “I am . . . ill prepared, Grinda.”
The general cocked his head.  “A man who takes this without considering the costs is not worthy of it.”
[…]
Haegan faced him.  Nodded and removed the winter cloak.  Grinda helped him into the ornamental mantle, then lifted the circlet.  “Nay,” Haegan muttered.  “Not the Fire King’s.  I’ll wear the plain circlet of a Zaethien prince.  Until the Contending.”
Grinda grinned.  Lifted something from a satchel.  “I thought you might.”  He handed the plain gold band over.
With a snort, Haegan allowed the general to set it on his head.
“Sire,” Praegur said, then nodded over Haegan’s shoulder.
He turned and found Thiel lingering on the fringes, and he went to her.
Thiel looked at the fire king’s crown as Grinda returned it to a box.  “Ye can no more fight or delay who ye were born to be than a raqine can change its wings.”  She smiled, taking in the circlet on his head.  “Prince today, but king soon enough.”
The weight of it crushed him, suffocating him with images of his father wearing it.  Of the way it caught the sunlight.  The way it made people sit up and take notice.  His father had been strong.  Powerful.
Thiel’s eyes glowed as her gaze slid from the gold to his eyes.  She smiled.  He felt it all the way to his toes, reveling in the way she looked at him.  “I would say come back to me, but this is not yer home.”
“I must stay alive before I can consider life after or invite the one I love to share it with me.”
Thiel’s chin quavered with emotion.
“An’ t’ fink,” came Laertes’s awe-filled voice, “him what can’t remember how he ended up in da tunnels will be him what commands da armies.”
“We ride,” Grinda’s voice boomed.

My review
Boy, can this gal write!  If Ronie Kendig’s books were any better, they would spontaneously combust – either that, or I would – and I should add that’s no pun intended when it comes to this series!  The word that comes to mind when I think of Ronie’s writing is ‘energy’; but it’s not just an in-your-face, full-of-action energy (although there is plenty of that!)  There’s a unique psychological energy, coiled in the anticipation and the tension; in what is said, and left unsaid.  And it’s so compelling!

Accelerant is the second book in this series, and I do recommend that you read the series in order.  The books aren’t a light read, coming in at 400+ pages each, but it is such a worthwhile investment of your time!  Ronie has created a wonderfully vivid world with its varied terrains, climates, peoples, and traditions – and especially with its fire wielding Accelerants and their Incipient nemeses.  It’s a world rife not only with the usual tension between good and evil, but also political and ‘racial’ tensions between the various groups of people and their leaders – many of whom seem to share a family tree that is as gnarled and tangled as the crowned heads of Europe.

Caught in the centre of it all is Haegan Celahar, the once crippled son of the Fire King; now able-bodied, endowed with fire wielding capabilities he can barely control, and bearing the weight of a kingdom and a prophecy on his untrained shoulders.  After being prevented from killing Poired Dyrth, he and his grievously wounded sister, Kaelyria, fly on Chima’s back to the frigid Northlands, where they are captured and taken before the leader of the ice-dwelling Eilidan, Aselan.  But if Aselan’s trust is difficult to earn, it is nothing compared to the fighting and wielding skills Haegan must acquire if he is to fulfil his duty as leader of the Nine.  And yet Haegan wants neither sword nor fealty.  He simply wants . . . out.  And to be with Thiel.

Kaelyria features a little more in this novel than the last, as she slowly recovers from her injuries, and there is some subtle (and delicious) romantic tension in her story along with a final scene that has left me holding my breath for the rest.  The other character who has really come into his own in this novel is Thiel’s brother, Tili, who makes a surprise challenge in the latter half of the novel.  I can’t wait to see where that’s headed.  And, of course, we’re still rooting for Haegan and Thiel to overcome the barriers to their HEA, but that’s become even more complicated now…

It is difficult to articulate the way in which Ronie’s characters and their journeys grip me.  Their struggles and emotions are so palpable, so absorbing, and she knows how to translate it into gripping action in her characters’ words and actions.  There’s also a potency in the way her writing engages your senses.  The details are so organic to the narrative, and so well-chosen in their economy, that you barely even notice you’re reading it rather than experiencing it; whether it be a one-on-one sword fight, trekking through various terrains, or simply feeling a tension-filled silence.

I could rave about this series all day, but really, all I’d be doing is preventing you from reading it for yourself.  And we can’t have that, now, can we?

I received a complimentary copy of this book from the author.  This has not influenced the content of my review. 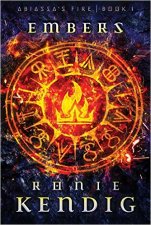