Posted on November 13, 2016 by Fiction Aficionado

Time for another instalment of my Christmas novella spotlight posts 🙂  This week I have Eva Marie Everson’s God Bless Us Every One, which weaves themes from Charles Dickens’ A Christmas Carol through the

God Bless Us Every One by Eva Marie Everson 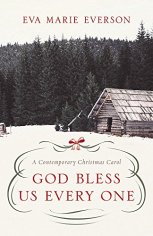 Charlene Dixon—called Charlie by family and friends—is devastated at the recent loss of her job. For the last five years, the twenty-seven-year-old has blossomed as the activities director of an exclusive all-girls school. But when a misunderstanding with the headmistress leads to a pink slip right before the holidays, Charlie packs up her dreams and returns to her grandmother, Sis, who raised Charlie as her own in the mountains of North Carolina.

When Charlie arrives—broken and confused—Sis immediately puts her granddaughter to work behind the scenes of the local school’s Christmas play, A Christmas Carol. Charlie doesn’t always like working with Dustin Kennedy, the drama teacher, but Sis encourages her to take a deeper look at why the book by Charles Dickens had been written in the first place and what it could teach Charlie about the needs of people in their own community.

Charlie walked up to the front of the room and placed her cup on the teacher’s desk.  “I understand you’re doing A Christmas Carol.”
He picked up the playbooks while Sis took a seat in one of the desks, crossed her legs and took a long sip of her latte.  “We are,” he said.  He grinned knowingly.  “I bet I know what you’re thinking . . . that old thing?”
Charlie stared at her feet.  “Well . . .”
“Charlie believes in contemporary plays,” Sis called to the front of the room.
“I don’t believe in them, Sis.  I simply prefer them.”
Dusty dropped the playbooks on his desk, adding to an array of papers, pens, and files that Clara Pressley would have demanded he set to rights.  “But A Christmas Carol is a classic.”  He raised his hands dramatically.  “A classic, I tell you.”  He looked at her again, mischief glinting from his dark eyes.  “You don’t have anything against Dickens, do you?”
“Not personally,” she shot back. “I never met the man.”
Dusty crossed his arms and rested his hip on the desk.  “But I assume you at least appreciate his writing.”
Charlie shrugged.  “As much as I have to.  I teach his works, but I like to allow my students to discuss whether or not he’s . . .”  Her words faded.
“He’s . . .?” Dusty prompted.
Sis coughed out a laugh behind her granddaughter.  “I believe the word she’s looking for is relevant.”
“Relevant?  Charles Dickens is megarelevant.”  He reached for one of the playbooks, curled on the edges.  “Do you even know the story behind the story?”

The romance in this novella was sweet and uncomplicated, and flowed naturally around the real focus of the story: Charlie’s relationship with her father.  Unbeknownst to Charlie, her father has been out of prison for three years, during which time he has reformed himself.  He now directs the homeless shelter in Burke County – the very shelter which will benefit from the proceeds of the performance she is now helping Dustin stage.  But how can they expect Charlie to just forgive and forget?

Add in the fact that everyone, Dustin included, seems determined to eschew anything remotely contemporary when it comes to the music in their production, and Charlie finds it very easy to identify with Scrooge’s cry of ‘Bah, humbug!’

I knew that Charles Dickens, through A Christmas Carol, was largely responsible for popularizing the expression, ‘Merry Christmas’, but I didn’t know how it related to Charles Dickens’ own experience.  This novella was a great way to discover that, and was a lovely story of learning to forgive as we have been forgiven.

I received a copy of this novel from the publisher.  This has not influenced the content of my review.

Forced into early retirement, Al Richardson knows what his wife will say when she hears the terrible news. Millie will insist that they open their B&B early. Where will that leave him? Carrying luggage and waiting tables? No way! He needs time to come up with another plan. With the help of an unlikely accomplice, Al spends his days scanning want ads and frequenting out-of-town coffee shops in an effort to hide his secret from all of Goose Creek—including his wife.

Millie is too busy to notice Al’s odd behavior. Between planning a huge Christmas party and holding tight to the reins of newcomer Lulu Thacker—whose tacky decorating schemes are sure to infuriate Main Street business owners—she has no time for anything else.

One thing is certain: In Goose Creek, no secret stays hidden for long. The most holy of holidays is swiftly approaching. Is Al in for a Merry Christmas or a Marriage Crisis?

On Sunday night the phone rang just as Millie rinsed the last soapy dish and handed it to Albert for drying.  She wiped her hands on a towel before picking up her cell.  A glance at the screen revealed the caller to be her best friend.
“Hello, Violet.”
“You need to get over here.”
No preamble, no pleasantries.  Not even an opening cliché, for which Violet was renowned.  That in itself was enough to cause Millie concern.
“What’s happened?  Are you okay?”
“I’m fit as a fiddle.  It’s them.”
The amount of disgust in the word left no doubt as to whom Violet was referring to.  She had no fondness and little patience for the Thackers, who lived next door.  Though she and Lulu had reached a kind of truce earlier that year, she found the couple unbearable and avoided them whenever possible.
“What have Lulu and Franklin done now?”  Millie glanced at Albert, who turned from placing the clean skillet in the cabinet to give her his attention.
“I can’t even begin to describe it.  You’ll have to see for yourself.”
The call disconnected.  Millie stared at the phone for a few moments, her thoughts whirling.  After Friday’s conversation with Lulu, she suspected she knew the problem.  Actually, she was kind of curious to see it herself.
“Get the car keys,” she told Albert.  “We’ve been summoned to Mulberry Avenue.”

My review:
Well, it’s no secret that I have been thoroughly enjoying the Goose Creek series.  It’s full of unique personalities – on which score, Franklin and Lulu Thacker definitely rate a special mention – and has had me tittering away in my little corner of the world as I follow the exploits of these everyday folk trying to get on with their day-to-day life in small-town Kentucky.  This Christmas novella is no different.

As Goose Creek’s Main Street Manager, Lulu Thacker is in charge of decorating Main Street for Christmas, but anyone who has read other books in this series will know Lulu Thacker never does anything by halves; if anything, she does things by doubles!  Even so, no one is quite prepared for the Christmas spectacle Lulu creates…

The ever-diplomatic Millie has her hands full trying to keep the peace between Lulu – still a relative newcomer to town – and the rest of Goose Creek’s residents, without getting her own friends off-side.  She’s also trying to find her own Christmas spirit knowing that her daughter and son-in-law, along with the two-month-old granddaughter she hasn’t met yet, won’t be able to come home from Italy, where they are currently stationed, for Christmas.

Al suffers a blow to his pride when he is told he’s no longer qualified enough for his own job.  Surely he can keep the truth from Millie long enough to find himself another job.  Suggesting Millie hosts a Christmas party at their home will serve double duty in distracting her from their daughter’s absence and his own situation.  But Lulu’s enthusiasm might get in the way of that, too…

The Goose Creek residents have definitely done it again.  And if there’s one thing I appreciate about this series, it’s that each of the characters have their redeeming qualities, no matter their faults.  Yes, even Lulu Thacker!  And as much as this series has set me to tittering, I needed to get me a tissue for the ending.  But they were happy tears folks!

Oh, and in keeping with the quirky tradition of some of Goose Creek’s residents, you can even get yourself a recipe for Broccoli Corn Bread!  Um, yum…?

What are you reading for Christmas?  Don’t be shy!