Hayden McCarthy is on track to become the youngest partner in her prestigious D.C. law firm . . . if the case she’s just been handed doesn’t destroy her first.

Hayden McCarthy knows firsthand the pain when justice is not served. It’s why she became an attorney and why she’s so driven in her career. When she’s assigned a wrongful death case against the government, she isn’t sure if it’s the lucky break she needs to secure a partnership—or an attempt to make sure she never gets there.

Further complicating matters is Andrew, her roommate’s distractingly attractive cousin. But Andrew’s father is a Congressman, and Hayden’s currently taking on the government. Could the timing be any worse?

The longer she keeps the case active, the higher the stakes become. Unknown enemies seem determined to kill the case—or her. Logic and self-preservation would indicate she should close the case. But how can she, when justice is still just beyond her reach?

The fifteen minutes stretched as Hayden watched the clock and prayed, each tick of the clock feeling like an hour. Finally she dialed the number Leigh had scrawled on the note.
“This is Judy Foster.”
After exchanging introductions and small talk slowed down by the Texas drawl, Hayden steered the woman toward Miguel.
“My assistant told me you could help piece together when he was detained and confirm where he was held.”
“Sure enough.”
Hayden waited, attempting to be patient, as computer keys clacked in the background.
“Border Patrol picked him up December 17. He was held in a general facility down near the border, the first place to work into the system.”
A few more clicks while Hayden continued to wait.
“Here we go. Then he was sent to the JD facility. It only takes juveniles, and he barely fit that definition.”
“JD?”
“Juvenile detention, near Waco. Actual address is some small town near there. Should be turning eighteen in a few weeks, so he still qualifies. Not sure where they’ll move him next.”
Hayden blinked. Did the woman not realize Miguel was dead?
“Anything else you can tell me?”
Judy paused. “Can you remind me why you need to know?”
“His family is trying to locate him.” Well, trying to track down the details. She hoped God would forgive her that little stretch of the truth.
“There’s nothing else here.”
Hayden froze, her pen suspended above the legal pad. “What do you mean?”
“Just that. Nothing’s been recorded since his transfer. If he had a medical issue or something else to note, it would be here. Since his file is blank, he must be keeping his nose clean and out of trouble.”
Hayden tried to process this information. How did her client have a death certificate if the state of Texas believed this young man was alive and in the JD facility? Had her client been lied to? Or had Judy lied? Her mind conjured up the image of Miguel’s very dead body. No, Miguel was very dead, which meant someone had purposely not entered that information in the state database—or had purged it.
Her pulse pounded in her temple.
“Anything else I can do for you?” A tinge of impatience colored Judy’s voice as another phone rang in the background.
Hayden cleared her throat. “I appreciate your help. If you have time, this young man’s family would appreciate learning anything else you have. They’re concerned about him.”
“Sure. I’ll fax what I have.”
How could Miguel have disappeared from the system? He’d died in custody! A cover-up suggested more than murder.

A good suspense is my cup of tea anytime, but make it a legal suspense and I’m extra happy, especially if there’s a good cross-examination. As it happens, this novel is all about the discovery process rather than court proceedings, but there was more than enough legal (and other) intrigue to keep me turning the pages.

Having just won a seemingly unwinnable case, Hayden McCarthy is immediately handed a new file and told, “This one has potential. The kind that can make your reputation. Or destroy it.” Um . . . no pressure! Unfortunately, no one is willing to cooperate with Hayden’s discovery attempts: not the victim’s mother, not the government, and not even her own law firm. The case involves the death in custody of an illegal immigrant and becomes more perplexing the further Hayden looks into it, not to mention more dangerous as the physical safety of both herself and others connected to the case becomes threatened. And that goes double for the ending!

The romance between Andrew and Hayden develops gently and steadily through the novel, and Andrew has a little dilemma of his own when someone threatens to reveal his nom de plume as political cartoonist, Roger Walters. Perhaps not a big deal under normal circumstances, but when you’re the son of a newly appointed senator . . .

Cara Putman definitely knows her legal stuff, but she includes it in a way that doesn’t leave the reader scratching their head wondering what’s going on. Nor does she burden the reader with explanations of legal processes—the reader understands all they need to through the unfolding of the story.

This was a great read, and I’m looking forward to the next in the series!

I received a copy of this novel from the publisher. This has not influenced the content of my review.

~ Other Books in the Series ~ 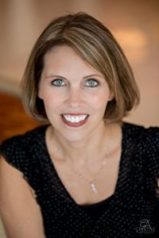 Since the time I could read Nancy Drew, I have wanted to write mysteries. In 2005 I attended a book signing at my local Christian bookstore. The rest, as they say, is history. There I met Colleen Coble. With prompting from my husband, I shared my dream with Colleen. Since those infamous words, I’ve been writing books.

In addition to writing, I am an attorney, lecturer at a Big Ten university, active in women’s ministry, and all around crazy woman. Crazy about God, my husband and my kids. I graduated with honors from the University of Nebraska-Lincoln (Go Huskers!), George Mason Law School (JD), and Purdue University’s Krannert School of Management (MBA).