Have you seen? There’s a sale on! 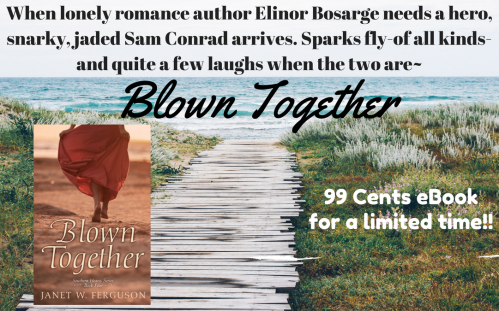 Sounds like a great time to put the spotlight on the hero, Sam Conrad!

The smug smile and those blue eyes. Deep cerulean in the center with dark indigo circles around the edge.

Sam stopped and stretched a long, toned leg behind him. His arms had been a tad bit strong when he’d caught her last night during that debacle.

Inspiration for character: I’m not sure about inspiration, but Sam appears as a secondary character in each of the three books of the Southern Hearts, prior to Blown Together, as a jaded smart aleck who drinks a bit too much beer, but he is a decent, honest friend when push comes to shove. I never really intended to make him a hero, didn’t even like him much at first, but after a while (3 books), I needed to know what made Sam tick. Why was he so snarky at times? Why wasn’t he happy? What was his back story? Everyone one has a past that makes them who they are, after all. I needed to dig in and find Sam’s heart.

Background: Sam’s father has bullied him his entire life, and Sam feels he can never live up to his father’s standards, no matter how hard he tries. Sam’s also been jilted at the altar by a woman his father wanted him to marry. So that’s the heavy baggage he’s been carrying around, making him frustrated and bitter, especially since he works at a bank with his father. Until… he leaves to find a new life.

Regrets: Sam regrets allowing his father to control his life for so long and for basing his worth on his earthly father’s approval.

The first thing people tend to notice about Sam is: Sam comes off as knowledgeable, but arrogant. He’s a well-dressed man, looks great in his tailored suit, but he’s got a smirk you can’t miss.

The thing he most admires about Elinor is: Elinor is a proper lady and an author. She carries a strong love for her family and is also passionate about the elderly in a local assisted living home. Seeing her concern for those patients proves that the quirky woman has a tender side. Her red hair and blue eyes don’t hurt either.

The thing that attracts him most to Elinor is: He finds Elinor to be a beautiful disaster. She seems to have such a hard time, between her severe allergies, horrible luck with dating, and people picking on her fragile heart. Something inside Sam is drawn to eccentric, delicate redhead. He longs to protect her.

Spends his free time: Sam enjoys learning, so he’s taken classes over the years while living in a college town. He likes to run, water ski, work out, and when bored, (in the past) drink a few beers.

Most influential person in his life: Sam moves to Mobile, Alabama, to be mentored by Big Roy Bosarge, Cassie (from Going Up South) & Elinor’s father. Roy models faith in a humble way, and he’s full of old country wisdom. Roy’s a huge hulk of a man, but his heart is just as big. He makes the perfect father figure for Elinor and her sisters. He’s protective, but fair and loving. He has permanent smile lines that crinkle by his eyes, and his laugh is loud and hardy.

“No sense you being as nervous as a long-tailed cat in a room full of rocking chairs.”

“He’s taking my place and is handier than indoor plumbing.”

“I think this partnership will make us both happier than a tick on a fat dog.”

“I don’t know if you’ve noticed, but Elinor Elizabeth can be a little intense. Kinda like a cat in a dog pound.”

I really liked Big Roy, especially as a loving father figure. If we don’t have that kind of father, we have a heavenly Father who knows the number of hairs on our heads and who holds us lovingly in the palm of His hand. He won’t fail us! Big Roy might say, “He’ll love you like his long lost huntin’ dog.”

Sam’s idea of a good time is… Give him a day on water in a boat.

In a room full of strangers, Sam would… Work the room if he needed for business, if not needed, then he’d completely ignore them all.

It’s karaoke night. Sam would… No thanks. There’s no good reason to make himself look ridiculous.

If this character could talk to the author, they would say… For all that’s right in the world, why did you make me look like a jerk for the first three books? Oh, and I guess, thanks for introducing me to Big Roy… and Jesus, by the way.

When love storms in…
Wealth manager Sam Conrad is accustomed to his domineering father ordering him around, especially at the bank where they both work. But when his father demands that Sam manage the inheritance of his bossy ex-fiancée, Sam has finally had enough. He leaves in search of a new life, and attorney Big Roy Bosarge from Mobile, Alabama, agrees to mentor Sam on his quest for direction. Sam didn’t expect to be thrown together with Big Roy’s eccentric and opinionated daughter.

Storm damage forces lonely romance writer Elinor Bosarge and her hairless cat, Mr. Darcy, out of her Fort Morgan Beach cottage. She plans to take refuge in the boathouse on her parents’ estate, but finds the place already occupied by one of her father’s “projects.” She’s shocked her father would allow another young man onto the property after his last mentee robbed her family and broke her heart. And from the moment she meets Sam Conrad, they disagree about everything from her cat to how to best renovate a local nursing home.

Between her mother’s health issues and the hurricane brewing in the Gulf, Elinor feels like her life is being ripped apart. It doesn’t help that she’s falling for the man she’s determined not to trust. Sam finds himself drawn to Elinor, wanting to help her and this new family he’s grown to love. But can he overcome the barrier she’s built to keep him out? When the storm rages and the two of them are blown together, can Elinor find the faith to open her heart again?

Janet W. Ferguson grew up in Mississippi and received a degree in Banking and Finance from the University of Mississippi. She has served her church as a children’s minister and a youth volunteer. An avid reader, she worked as a librarian at a large public high school. Janet and her husband have two grown children, one really smart dog, and a few cats that allow them to share the space.