Happy Thursday, booklovers! Have you discovered the Eagle Harbor series yet? Now is the perfect time to do so, because the first in the series, Love’s Unfading Light, is currently free on Kindle! What a perfect time to learn a bit about the writing habits of the author of this series, Naomi Rawlings. 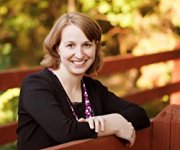 Naomi Rawlings is the author of seven historical Christian novels, including the Amazon bestselling Eagle Harbor Series. While she’d love to claim she spends her days huddled in front of her computer vigorously typing, in reality, she spends her time homeschooling, cleaning, picking up, and pretending like her house isn’t in a constant state of chaos.

She lives with her husband and three children in Michigan’s rugged Upper Peninsula, along the southern shore of Lake Superior where they get 200 inches of snow every year, and where people still grow their own vegetables and cut down their own firewood–just like in the historical novels she writes.

Editing: Ugh. Why can’t everything I write be perfect the first time around?

Spelling and Grammar: Not a big deal, and it doesn’t usually take that long to fix.

Reviews: I love reading what other people think of my books (especially when they have good things to say!)

I am quite disciplined about my writing time: Absolutely. With three kids at home, I have to be, or I’d never get any books finished.

What is your worst habit as a writer?

Snacking while I write. At this point, I have no idea how to write without craving coffee and chocolate.

What is the average time it takes for you to write a first draft?

How do you choose your characters’ names?

Good question. I tend to find myself using a lot of Bible names. I also use old census records to look up names that were historically popular for certain decades.

What is your go-to snack when writing?

Yeah, coffee and chocolate. Too much. Way too much.

What do you do when you get writer’s block?

Run crying to my best writing buddies, Melissa Jagears and Roseanna White, and ask them for ideas.

What is the best thing about being an author?

Getting to work in my pajamas

How do you celebrate typing THE END?

By getting up early the next morning and starting the revision. Boring, I know, but so very true. Half the time I don’t even remember to post that I wrote the end on Facebook.

Tressa Danell is finished with men—from the wastrel who left her a widow, to the smelly trapper who keeps proposing, to the banker who wants to repossess her bakery. Every hour is spent working to pay off her late husband’s debt and keep a roof over her son’s head, though it’s doubtful she can do both for very long. But one thing’s certain—she’ll never be beholden to a man again.

Tired of living in a small town that blames him for actions his father committed ten years ago, Mac Oakton is scheduled to leave Eagle Harbor. So why does the pretty widow at the bakery keep tugging at his heart? He can’t get involved in her predicament when he’ll only be around for two more weeks.

But when Tressa’s burdens overwhelm her, they both face a decision. Can Mac set his own plans aside to help? And can Tressa accept his support if that means giving up her independence … and being obligated to a man again?

Where did you get the inspiration for this story?

I actually wrote this series out of order, starting with book 2, and then going back and writing book 1. So I suppose you can say I got the inspiration for Love’s Unfading Light from the book that comes right after it, Love’s Every Whisper. The lighthouse featured in the novel is an actual lighthouse on Lake Superior that’s open for tours during the summer. So I drew some of the inspiration from visits to real-life Eagle Harbor and the lighthouse there.

What was the first part of this story to come to you?

Probably the shipwreck rescue. I actually came up with that when I was writing the second novel, but it was so very fun to go back and write the first rescue that became the backbone for the Eagle Harbor Volunteer Life-Saving Team.

Where did you get your inspiration for these characters?

I’m not sure I know. I liked the idea of an orphan boy all grown up and making a life for himself. I also liked the idea of the orphan-turned-man seeing another boy in a similar situation and going out of his way to help.

How did you get to know these characters?

By diving straight in and writing scenes in their different points of view. It’s one of those “walk a mile in someone else’s shoes” kind of things. The more time I spend in my characters heads, the better I get to know them, and the fuller I can make them on the page.

What was the hardest part about writing this novel?

Getting everything in the first book to work with the second book, which was already finished. It’s hard to write backwards from a timing perspective.

What was the easiest part about writing this novel?

Colin. The little fatherless boy just kind of jumped into the novel and stayed there. I loved writing about him.

What was the most interesting piece of research you did for this novel?

Again, that would be visiting the Eagle Harbor Lighthouse as well as the boathouse from the old life-saving station on the other side of the harbor. Special thanks to the Keweenaw Historical Society for maintaining the building and keeping it open for the public.

What would you enjoy researching if you were a historical fiction author?