Posted on August 22, 2017 by Fiction Aficionado 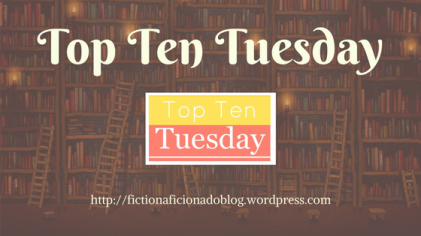 Top Ten Tuesday is sending me on a trip down memory lane today! This week’s topic from the girls at The Broke and the Bookish is a back-to-school theme, so I thought I would make my list about the books or series I enjoyed throughout my school years, right from my earliest school memory, through to high school.

I have many memories of my mother reading to me before I went to school, so my love of reading (and being read to) started before school, but no story had enchanted me like The Enchanted Wood, which my first or second grade teacher read to us (I can’t remember which class, because we had the same teacher for both years). I still have fond memories of Moonface, Silky, Mr. Whatshisname, and, of course, Saucepan Man. But most of all, I’ve always wanted to use that slide that goes right down the inside of the tree!

I credit many of my primary (elementary) school teachers with my love of literature. The next series I remember being introduced to is the Chronicles of Narnia. I have read these books soooo many times over the years, and they have never lost their appeal. I changed schools in Grade 3 and our new teacher had just begun reading Prince Caspian to the class. It wasn’t long before I went back to The Lion, The Witch, and The Wardrobe in order to discover the beginning of Peter, Susan, Edmund, and Lucy’s story, and then on to the other books in the series.

Some time during my primary school years, my mother gave me Anne of Green Gables for Christmas. I guess I was probably nine or ten, maybe slightly younger. All I know is I never looked back. Anne has been one of my enduring favourites ever since, and I’ve read the whole series more than once.

Having already been introduced to Enid Blyton, it was natural to progress to The Famous Five. Perhaps that’s where my love of mystery and suspense stories first developed. Who knows? I now have my own version of the Famous Five, who love these books (and the TV series, as outdated as it is) every bit as much as their mother did!

Anyone else remember Elizabeth Gail, the foster girl adopted by the Johnson family? My mother used to run the bookshop attached to our church, and I’m pretty sure that’s how I first got introduced to this series. I think there are 18 or 19 books in the series that follow her from about 11 or so years of age through to her career as a concert pianist and her eventual marriage. I still have the whole series in a box somewhere…

My sixth grade teacher was responsible for introducing me to this book. He read it aloud to us each morning after recess. I think I was the only child in the playground counting down until recess finished! Oh, how I loved this story! There was something about the way my teacher read it, with a combination of reverence and some tone that inspired anticipation and little trills of pleasure down my spine. Ahhh….

I can’t remember how I was introduced to Lori Wick’s novels, but her Californians series became one of my favourites and most re-read during my early teen years. The main character in her first novel was Kaitlin Donovan, known as Kate, and in my idealistic thirteen year old way I wanted to be just like her. I succeeded in name, at least, when I married my husband and became Katie Donovan!

I’m pretty sure every mystery buff has read at least some of these books at some time in their adolescence. Thank goodness for libraries! Of course, now that I look back on them as an adult, it’s almost comical how many skills these teen detectives had. I remember making at list at some point of all the skills I wanted to develop so that I could become a crime-solver like Nancy. I even tried picking a lock with a bobby pin (not being old enough to have a credit card), but alas, I fear I wasn’t cut out to be a super sleuth. Of course, perhaps if Google had been around then to help me out…

It’s impossible to pick just one Agatha Christie book, but I’m pretty sure Death on the Nile was one of the earliest ones I read. I was probably a little more partial to Poirot’s mysteries—I think something about his personality appealed to me—but it didn’t really worry me. Once I started, I was hooked!

Oh man, these series! Hours and hours of engrossing reading. I’m pretty sure my school library (I attended a Christian school) introduced me to these books, and I remember ordering the Zion Chronicles series from the local Christian bookstore one summer, and waiting and waiting for them to arrive. Oh, the agony! They’re not light reading, and they’re chock-full of history and amazing stories, set during World War II and then the beginning of the new Jewish nation, Israel. I’m pretty sure I barely even surfaced from my room while I was reading these series.

Which books or series do you remember enjoying most during your school years?