Posted on October 21, 2017 by Fiction Aficionado

Becoming a Christian is the best and worst thing that has ever happened to Sarah Hollenbeck. Best because, well, that’s obvious. Worst because, up to this point, she’s made her very comfortable living as a well-known, bestselling author of steamy romance novels that would leave the members of her new church blushing. Now Sarah is trying to reconcile her past with the future she’s chosen. She’s still under contract with her publisher and on the hook with her enormous fan base for the kind of book she’s not sure she can write anymore. She’s beginning to think that the church might frown on her tithing on royalties from a “scandalous” book. And the fact that she’s falling in love with her pastor doesn’t make things any easier.

With a powerful voice, penetrating insight, and plenty of wit, Bethany Turner explodes onto the scene with a debut that isn’t afraid to deal with the thorny realities of living the Christian life.

The rest of this book could be a detailed testimony of how my best friend led me to the Lord that day. It’s a good story, and I could happily detail to you every word of the prayer that we prayed in the parking lot that evening—the first sincere prayer I had prayed since I was a little girl praying with my grandmother, the only person of faith in my young life.
But that isn’t the story I need to tell. This is the story of my feeble attempts to make sense of my life, and those attempts began moments after I prayed and asked Jesus into my heart.
“Now what?” I asked Piper with excitement and anticipation and through the tears. The tears had begun in anger and then transitioned to shame and sorrow, but by the time I had completed that prayer, the tears represented nothing but joy and gratitude.
My heart was ready to live for God, but I had no idea what that meant. Did I need to go to Africa and spread the gospel to impoverished children? Did I need to donate all of my worldly goods to charity?
I should pause right here and inform you that apart from my grandmother, everything I new about religion I basically learned from movies—and more often than not, The Sound of Music. To me, it seemed perfectly logical to think that the next step was to donate all of my clothes, like Maria did when she joined the convent. And then someday, when I was ready to return to the world, after God had closed a door and opened a window, I would wear my one ugly dress that the poor hadn’t wanted.
I didn’t really think that was how it would go, though that made as much sense to me as anything else I could think of. Looking back, I don’t know what I was expecting, but I knew that Piper would direct me. Obviously God had placed her in my life, like my own personal Christian Mr. Miyagi. I didn’t have knowledge or vocabulary for it at the time, but I don’t think I would have been all that surprised if, before the night was through, she had assigned me my spiritual gifts and set me on my road of ministry.
“Now what?” she repeated back to me as she laughed, wiping away a few tears of her own, no doubt sensing the anticipation in my eyes. “Now . . . coffee!”
We went and drank coffee and ate scones, as we had almost three years prior when she’d been only Girl I’d Never Noticed Before She Insulted My Poetry. And, surprisingly, we talked about some things other than the commitment I had just made. We talked about Sense and Sensibility (which Piper confessed she didn’t actually totally hate, but she made me promise not to tell the rest of the group), and we talked about what books might be coming next. We talked about some of the more noteworthy emails and phone calls I had received from Patrick, and wondered if he’d somehow suffered from memory loss that made him more likely to believe that I would ever, for even a moment, fall for any of the lines he threw at me. We talked about music and men and a business trip that she had just taken to Detroit.
It was rather shocking for me to discover that though I’d made such a huge choice and commitment, the day-to-day, moment-to-moment activities still went on. Nothing had really changed.
“Excuse me,” a twentysomething woman with a baby in her arms interrupted us kindly.
Had she noticed my glow? Was I actually glowing? I wouldn’t have had difficulty believing it. I remembered that in The Ten Commandments, Charlton Heston had been glowing when he came down the mountain, carrying the tablets. Of course, his hair had also gone completely white at the same time, and that effect of being in God’s presence was slightly less welcome.
“Yes?” I smiled at her, feeling what I can only describe as self-righteous humility, if that’s a thing.
“Aren’t you Raine de Bourgh?” she asked nervously, and just like that my glow faded.
“Um . . .”
“Oh!” She laughed. “I’m sorry. I know that’s not your real name. I just wanted to say I love your books. Such a great escape when life gets to be too much.” She rocked the baby, who was suddenly fussing, as if it detected a heretic in its midst.
“Um . . .”
That was all I could say.
“Well,” the woman said, clearly being made to feel uncomfortable by my lack of conversational skills, “nice to meet you.”
Piper barely made it until the woman walked away before she burst into laughter. She had no doubt been holding it in the entire time.
“Sarah, had you forgotten that, despite your salvation, you are still one of the most famous romance authors on the planet at the moment, and that you will still be recognized for your kinky novels?”
The honest answer? “Sort of.”
Piper laughed until she cried, for probably a solid three minutes, and then she went back to her coffee with a sigh.
I didn’t see anything funny about any of it.
[…]
But suddenly I understood how Piper might have felt the night she stormed out of book club rather than read Stollen Desire. I was overwhelmingly ashamed of every word I had written.

If making people laugh was prohibited by law, Bethany Turner would be on Interpol’s Top Ten Most Wanted list. Come to think of it, causing people snort with laughter SHOULD be prohibited by law, in which case I’m going to have to report her anyway, because the humour in this book occasionally took me so much by surprise that my laughter kind of exploded involuntarily. And I don’t necessarily mean through my mouth . . .

Sarah Hollenbeck is a totally adorkable character. She’s random and has a penchant for dramatic hyperbole, but she’s also genuine (even when she’s misguided!) and refreshingly honest. It’s impossible not to love her, as Ben Delaney very quickly discovers! And Ben is just . . . well, it’s impossible not to love him, too. He’s warm, funny, and just as genuine as Sarah—and so in over his head!

I know ‘love at first sight’ often gets a bad rap—and it’s a difficult trope to pull off successfully—but I think that’s for two reasons. (1) The connection between the characters is often shown purely through superficial physical attraction; and (2) Most authors overlook the unique challenges that come from such a strong attraction to someone you really don’t know very well. Bethany Turner avoids both of these pitfalls.

There is certainly a strong physical attraction between Sarah and Ben (and I loved the mixture of humour and sincerity in the way this was portrayed), but it was the totally adorable conversation they have when they first meet that won me over to this relationship. I could feel the emotional connection being forged and how well suited they were to one another, and that sense only grew as their relationship developed. But the fact remains that it takes time to really get to know someone, and Ben and Sarah encounter several bumps along the way as they get to know one another and work at building the kind of openness, understanding, and grace that gives their attraction a lasting foundation.

And that brings me to Sarah’s unique circumstances—responsible for the majority of the bumps they encounter as their relationship develops, but probably not in the way you anticipate. Even before I started hearing all the rave reviews for this novel, I knew I wanted to read it, because, let’s face it: just because we become new creations in Christ doesn’t mean our old creations aren’t still around to haunt us. And the premise of a woman famous for writing steamy romances converting and falling for her pastor in quick succession had ‘read me’ written all over it.

I’m so glad I did read it. It was hilarious and heartfelt at the same time, and constantly surprised and delighted me. This isn’t just for the keeper shelf; it’s for the books-I-could-read-over-and-over-again shelf! 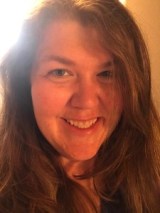 Bethany Turner is the director of administration for Rock Springs Church in Southwest Colorado. A former VP/operations manager of a commercial bank and a three-time cancer survivor (all before she turned thirty-five), Bethany knows that when God has plans for your life, it doesn’t matter what anyone else has to say. Because of that, she’s chosen to follow his call to write. She lives with her husband and their two sons in Colorado, where she writes for a new generation of readers who crave fiction that tackles the thorny issues of life with humor and insight.