Posted on November 6, 2017 by Fiction Aficionado

The Fartherings’ Scottish Holiday Takes a Dark Turn
Drew Farthering arrives in idyllic Scotland for the 1935 British Open at Muirfield hoping for a relaxing holiday, but he soon finds a mystery on his hands. Lord Rainsby, his host at Thorburn Hall, fears his business partner may be embezzling and asks Drew to quietly investigate. Before Drew can uncover anything, Rainsby is killed in a suspicious riding accident.

Thorburn Hall is filled with guests, and as Drew continues to dig, he realizes that each might have had a motive to put Rainsby out of the way. Together with Madeline and Nick, he must sort through shady business dealings, international intrigue, and family tensions to find a killer who always seems to be one step ahead.

“There you are,” Madeline said, taking Drew’s arm. “We though you might have moved on.”
“Waiting for you, darling.” Drew smiled at both girls. “So what shall it be? Would you two like to follow Mr. Cotton for a while? Or shall we find somewhere to make camp?”
Carrie slipped her arm through Nick’s. “I’d like to walk a bit if that’s all right.”
“Then we’ll walk,” he said. “I believe that’s one of your countrymen coming just now. Picard. Shall we watch him?”
They watched Picard and the rest of his foursome tee off, then followed them down the fairway along with the crowd.
“Oh, look,” Carrie said, looking across to the trees on the other side of one of the hazards. “It’s Mr. MacArthur. Who is that girl?”
Drew looked over to see MacArthur talking to a young blonde probably no more than half his age. She had her arm through his and was leaning close, a coy little smile on her red lips as he lit her cigarette.
“Hmmm,” he said, “perhaps she’s the reason things grew less than blissful between him and Mrs. MacArthur. No, don’t look at them.”
“Trick is to look just beyond and to one side and pretend you’re telling someone about what you’re seeing,” Nick said, evidently finding this a good excuse to pull Carrie just a bit closer to his side. “Then the observed party doesn’t realize he’s observed.”
“We saw that girl before,” Madeline said, not looking toward her. “When we were in the clubhouse. One of the men, I thought he was probably a caddie, came over and said something to her. She answered him, and he said something else, something right in her ear, and then took her hand. She answered that, and they both went in opposite directions. It is the same one, isn’t it, Carrie?”
“She didn’t look very happy about whatever he said,” Carrie added. “Mad enough to have her fist clenched. I don’t know why. He’s a very nice-looking man.”
“She’s a very nice-looking girl,” Drew said, pretending to watch one of the golfers as he knocked a bit of dirt and grass out of his cleats.
“There’s always one sure way of finding out if someone’s covering up,” Nick said. “We suddenly notice he’s over there and say we’ve been looking for him and ask him to introduce us to his friend. If he’s hiding something, it’ll probably be noticeable.”
“I’m not sure that would get us what we want quite yet,” Drew said. He put his arm around Madeline’s waist, guiding her a bit more deeply into the crowd. “For now, I’d rather he not suspect we’ve seen them together. Might be nothing after all, but if it is, I don’t want him to get the wind up.”
“I can see why the three of you enjoy this so much,” Carrie said, a gleam of intrigue in her eyes. “This part is actually fun. What do you suppose he’s up to?”
Nick squeezed her hand. “I’ll tell you when you’re older.”
She wrinkled her nose at him. “If it’s just that, you’d think she’d be more interested in the handsome young caddie than the old duffer, wouldn’t you?”
“Depends on if she’s after looks or money,” Drew said, and seeing the crowd was walking on to follow the last foursome to the next tee, he waited for MacArthur and his companion to move on as well and then led everyone after him.

My favourite detective is back on the case! Not only that, but with Carrie’s return from the States, the whole gang’s back together again! Unfortunately, Carrie’s not as enthusiastic about amateur sleuthing as her friends (those who have read some of the earlier novels will know why), so poor Nick is sometimes torn between helping Drew and Madeline, and spending time with Carrie, but when Lord Rainsby’s daughter asks Drew to look into her father’s ‘accidental’ death, the gentleman in him can hardly say no, now, can he?

Once again, there’s a great ensemble cast here:
– the grieving widow, Lady Louisa Rainsby, and her daughter Joan;
– golf caddie Jamie Tyler, who’s earned a reputation as a cad as well as a caddie;
– Lord Rainsby’s long-time friend and business partner Reginald MacArthur, a cartographer whose political loyalties might be in question;
– Lady Louisa’s dear friend Elspeth Pike and her somewhat dour-faced husband;
– and last, but most definitely not least, the enigmatic, nimble-fingered Russian Count Kuznetsov, who claims that Elspeth Pike is his muse (he’s writing a symphony, you know), much to her husband’s chagrin.

Only one or two of these characters avoided any serious suspicion during the story, and I remained clueless as to the real villain until the end.

If you’ve read any of Drew’s previous adventures, you’ll know that Julianna Deering captures the 1930s era and her characters perfectly. In this instance, I particularly enjoyed Drew’s interactions with Count Kuznetsov, which showed Drew at his politely ironic best (I seriously don’t know how he kept a straight face, because I sure didn’t!) And as always, I love the beautiful picture of married love and companionship that Drew and Madeline portray.

There are also some personal developments for some of our favourite characters. As previously mentioned, Nick and Carrie are finally on the same continent again. It’s no secret that Nick’s ready to pop the question, but there are still a few clouds on the horizon. And Drew’s search for his birth mother has been unsuccessful to date. Is it a waste of time and money to continue?

As a lover of Dorothy L. Sayers and Agatha Christie, this series has been a thoroughly enjoyable addition to my mystery collection, and I sincerely hope it’s not the last we see of Drew and friends!

Read my reviews for Dressed for Death and Murder on the Moor. 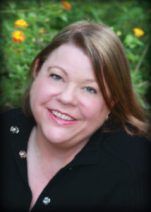 Julianna Deering is the creator of the acclaimed Drew Farthering Mystery series. She has always loved British history and is a particular fan of the writings of Dorothy Sayers and Agatha Christie. She graduated from the University of Texas at Dallas with a degree in business administration and spent several years as a Certified Public Accountant. She lives outside Dallas, Texas.