Posted on January 29, 2018 by Fiction Aficionado

Josiah Chamberlain’s life’s work revolves around repairing other people’s marriages. When his own is threatened by his wife’s unexplained distance, and then threatened further when she’s unexpectedly plunged into an unending fog, Josiah finds his expertise, quick wit and clever quips are no match for a relationship that is clearly broken.

Feeling betrayed, confused, and ill-equipped for a crisis this crippling, he reexamines everything he knows about the fragility of hope and the strength of his faith and love. Love seems to have failed him. Will what’s left of his faith fail him, too? Or will it be the one thing that holds him together and sears through the impenetrable wall that separates them?

No one had asked the “What happened?” question more often than Josiah. He owed it to these innocent parents to listen while they wondered aloud.
“I don’t understand why they wouldn’t have taken her to Paxton, Josiah.” Stan hung his coat and Catherine’s in a narrow locker designated for the purpose. “Perfectly good hospital there, isn’t it?”
“For its size.” Josiah moved a coffee table out of the way so his in-laws could navigate to the couch.
“Then . . . ?”
Catherine patted her husband’s arm in a gesture Josiah had seen many times over the years. Correcting or calming, it always came across as loving. “Stan, we’re asking the wrong person. I’m sure Josiah was as surprised as we were that the ambulance brought her here. Right?”
About that and a few dozen other things about your daughter. “Right. We’ll get answers eventually. Right now the primary concern is—” His wife’s name caught—unvoiced—in his throat.
“No sense worrying about that, I guess,” Stan said. “The choice of hospitals, I mean. I found it curious, though. Maybe had something to do with insurance.”
He’d heard of that before. Ambulances taking a longer route to the hospital with which it had a contract. That didn’t explain why the accident happened the opposite direction from home.
Would Karin rally enough to explain any of the curiosities? Josiah had written a family crisis manual that not only made the best-seller list but had become a staple at airport bookstores and bookstands. At the moment, he couldn’t remember any of its sterling points.
Something, something, something, you’ll get through this.
And readers bought that? Could his life’s work be as meaningless as it sounded in an ICU family waiting room?

Wow. This book will do a number on your heart. Josiah Chamberlain certainly didn’t win any awards for husband of the year at the beginning of this novel, but his journey of re-evaluation—of awakening, really—was a powerful read. 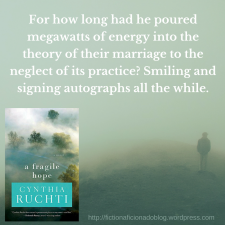 The story begins with one chapter from Karin’s point of view, giving us a window into her state of mind in the lead-up to the event that sets the rest of this book in motion. From chapter two onward, Josiah’s point of view carries the story, and despite the glimpse the first chapter affords us, it soon becomes clear we’re as much in the dark as he is. Unanswered questions abound, but the bare facts that confront him when he’s called to his wife’s side are enough to shatter his world. In the months that follow, as Karin lies in a coma barely hanging on to life and Josiah’s life becomes a pattern of ten minutes in, fifty minutes out (of her room), he takes a good, hard look at himself and doesn’t much like what he sees.

It’s testament to the strength of Cynthia Ruchti’s narrative style that she can make such an introverted story a truly gripping read. Karin’s parents, a fellow ICU veteran, and various other minor characters all play a role in shaping Josiah’s journey, but at its core, this is the story of a man who searches the depths of his soul to nurture a love that sacrifices self, even as Christ did ‘on the night He was betrayed…’  With heart-gripping results.

Although I anticipated the way some parts of this story would resolve, it didn’t take away from the emotional impact of those scenes when they came. A fantastic read if you’re looking for a story that reaches right into the heart. 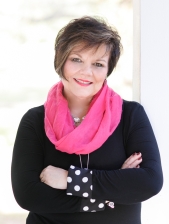 Cynthia Ruchti tells stories hemmed in Hope through her novels, novellas, devotions, and nonfiction, and through speaking for women’s events/retreats and writers’ conferences/workshops. She draws from 33 years of experience writing and producing the 15-minute daily radio broadcast, “The Heartbeat of the Home.” Her books have received recognition from RT Reviewers’ Choice, PW Starred Review, Selah Awards, Christian Retailing’s BEST Awards, CLASSeminars Award of Excellence, Golden Scroll Awards, and more. She serves as Professional Relations Liaison for American Christian Fiction Writers, is a board member of the Deliver Hope ministry, and is part of the worship team at her church. She and her husband live in the heart of Wisconsin, not far from their three children and five grandchildren.