Michelle Thomas has it all. Beautiful and successful, she’s just opened her own law firm in Freedom Lake. What more could she want? When her old flame rolls back into Freedom Lake, she’s intent on ignoring him. But how can she give the widower and his precious twin girls the cold shoulder?

Still reeling from the death of his wife, Guy Pierre returns to Freedom Lake to take over as town sheriff and raise his twin daughters. Alone. Yet, life keeps throwing Michelle in his path and sparks of interest began to rise.

Will old secrets tear them apart again or can they find the faith to let God’s grace restore what has been broken?

“Promise we’ll always be friends.” Michelle Thomas glanced at her best friends, Jo Ellen Baker and Chloe Smith. Graduating from high school was going to change their relationship no matter what. She just prayed it would stand the test of time.

“Of course, we will,” Jo said in her no-nonsense tone of voice.

“Just because we’re going to college doesn’t mean our friendship will change,” Chloe stated in her soft voice.

Michelle sighed. She loved her friends, but sometimes, they didn’t seem to understand how tenuous time could be. In the blink of an eye, life could be altered.

“I love you, guys.” She smiled at them, eyes misting over.

Michelle wrapped her arms around them. Life couldn’t get much better.

The sound of the doorbell brought the hug to a close. Her parents had gone out for date night and had allowed her to have a sleepover with her girls. She knew they didn’t like her opening the door when they weren’t home, but she was an adult now.

She peered through the peep hole and frowned. Why was there a police officer at her door? She opened the door. “May I help you?”

The officer removed his hat, a somber look coloring his features. “Are you Michelle Thomas?”

She nodded. This was getting stranger by the minute.

“I’m Officer Simpson with the Kodiak City Police Department, may I come inside?”

What were the Kodiak City Police Department doing in Freedom Lake?

Jo quickly padded to the door to stand next to her. “How do we know you’re really the police?”

Trust Jo to be cynical and non-trusting. Who would lie about that?

He handed over his badge and Jo examined it. Michelle wanted to laugh at her serious expression, but something was off. Something wasn’t right.

Chloe peeked over Jo’s shoulder. “Looks real to me.”

“I suppose,” Jo replied. She handed the badge back. “Just say what you have to say right there.” Jo pointed past the threshold, as if the officer wasn’t strong enough to cross it if necessary.

The officer met Michelle’s gaze, his gray eyes softening. “Ms. Thomas, your parents have been involved in an accident.”

“What? Are they okay?” She swallowed, trying to dislodge the lump in her throat. She met Jo’s eyes, noticing the creases in her forehead. She vaguely noted Chloe’s hand on her back.

It sounded like a recording. The words didn’t make sense. How could they be dead? She just saw them. Her dad had teared up after the graduation ceremony while they were taking family photos.

Slowly, the sound of wailing penetrated her thoughts. She wished they’d shut up. How could she hear what the officer was saying if they wouldn’t stop?

Her knees buckled and she felt arms come around to steady her.

They were dead. At the blink of an eye, her parents were dead.

In my opinion, Toni Shiloh has delivered her best novel yet with Grace Restored. And she hasn’t shied away from characters who are asking the tough questions, either. Both Michelle and Guy have suffered significant losses in their lives—Michelle lost her parents just as she graduated from school, and Guy lost his wife when she gave birth to his three-year-old twin girls—and they’re struggling with a God who would let that happen. But even more than that, these two have a complicated history of their own…and only one of them knows the full story.

One of the things I’m enjoying the most about this series is the sense of fellowship between all of the characters. There’s Jo and Evan from the first novel in the series—Returning Home—and several other friends we’re getting to know, some of whom I hope will be getting their own stories (Chloe, Holly, I’m looking at you!) They come together for weekly Bible study, and if you love authentic discussion between a group of young-ish believers (and in some cases pre-believers) then you’ll love the discussions this group has. Not only are they there for each other spiritually, but they support one another through difficult life circumstances—and Michelle isn’t the only candidate for that kind of support here, as Chloe begins the process of trying to find her father.

But I think my favourite aspect of this novel is the way Michelle and Guy were forced to confront the areas of hard-heartedness in their lives—not just spiritually, but towards those who have wronged them or hurt them. I don’t want to say too much in case I give anything away, but don’t be surprised if you find yourself tearing up!

I’m looking forward to seeing what’s next for these characters.

I received a copy of this novel from the author. This has not influenced the content of my review, which is my honest and unbiased opinion. 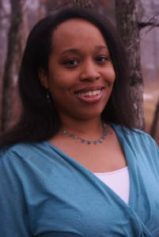 Toni Shiloh is a wife, mom, and Christian fiction writer. Once she understood the powerful saving grace thanks to the love of Christ, she was moved to honor her Savior. She writes to bring Him glory and to learn more about His goodness.

She spends her days hanging out with her husband and their two boys. She is a member of the American Christian Fiction Writers (ACFW) and the president of the ACFW Virginia Chapter.

1. How did you decide that you wanted to write Christian romance?  What inspired this?
When I rededicated my life to Christ, I wanted to be used by Him. It wasn’t until I went back to school to get my Bachelor’s degree in English that the writing bug really called to me. Not that it hadn’t before, but that it could actually be a way to reach people. I went to my local library to see if they had any books like this. I had never heard of Christian fiction so once I found the section, I began devouring the books and the lessons found between the pages.

2. How often do you hear from your reader fans? Do you have any funny and/or awkward stories?
I hear from readers maybe once a month. Usually it’s because they’re sharing a review with me or they just want to share how the story touched their hearts.

3. What inspired the idea for Grace Restored?
When I wrote book one, I knew the characters for each series. It wasn’t until I was midway through book one, Returning Home, that I realized how much of a story Guy and Michelle had. As soon as I finished the first draft of RH, I dove into Grace Restored with anticipation. They did not disappointment me.

4. What do you want readers to take away from reading Grace Restored?
That no matter what skeletons you shoved in your closet, God’s grace is enough to restore You to the kingdom, to peace of mind, to faith.

5. What is your current WIP? What can you tell us about it?
Currently I’m working on finishing the fourth and final book in the Maple Run series. This book features Shorty and Nikki with characters from the first three books making an appearance. These two have really struggled to share their thoughts with me from the moment I tried to make them book 2, lol. Thankfully, they’re opening up but it’s still a struggle. 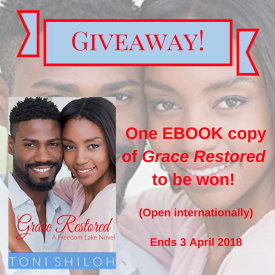 For a chance to win an e-copy (International) of Grace Restored by Toni Shiloh, comment on this blog responding to the following question: What verse captures God’s grace for you? Then click on the graphic to go to the Rafflecopter form! *