Posted on April 2, 2018 by Fiction Aficionado 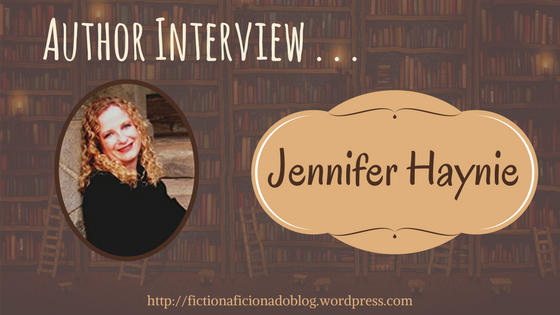 Please join me in welcoming romantic suspense author Jennifer Haynie to my blog today. Jennifer has recently released the second full-length novel in her Unit 28 series (you can read my review here) and I invited her to my blog so we could all get to know her a little better. 🙂 But first…

Hot off her first mission as a Unit 28 contractor agent, Alex Thornton wants nothing more than to focus on building a life with Jabir al-Omri, her best friend and boyfriend of five months.

A secret chains Jabir, one with such dire consequences that seeking freedom from it will cost him dearly. He finds himself caught between honoring those he cares about and being completely truthful with Alex.

Hashim al-Hassan craves vengeance against the woman who deceived him ten years before. The target of his wrath? Alex.

When Alex and Jabir receive an assignment to find the murderers of a shipping executive, their investigation brings them to the attention of Hashim. He begins stalking her. The bodies pile up, and people disappear.

Now, with Alex squarely within Hashim’s crosshairs, Jabir yearns to tell her what he knows. Yet the truth may destroy both her and those she loves the most.

I’d like to introduce myself. I’m Jennifer Haynie, worker at the Division of Water Infrastructure at the North Carolina Department of Environment and Natural Resources by day, novelist by night. I’ve learned quite a bit over the years, not just in the craft of writing, but how to balance my day job, my passion for writing, my marriage, and a healthy social life. Sometimes it feels like walking on a knife’s edge.

On-the-edge suspense. On-the-edge living. I write about both of these on my website, http://www.jenniferhaynie.com. While I’ve enjoyed blogging, writing novels is my passion.

I’ve decided that I never take the easy route in things, especially when it comes to writing. As a child, I was a numbers person with mathematics as my favorite subject. In high school, I began writing, even winning a prize for a short story I wrote. Still, numbers and science called me. Rather than take the typical writer’s route of majoring in English, I majored in physics, then proceeded to graduate school in environmental management. During the twists and turns of job changes, writing became one of the constants in my life along with my faith.

One of my author friends told me that a novelist usually has to write about a million words before they get published. I have to agree with her. The vast majority of those words are locked away, never to be consumed by others. But the novel that contains probably my millionth word is the one that got published.

Since then, my life has taken more twists and turns as I’ve continued to learn the craft of writing and develop this gift God gave me. So far, I’ve published one novel, Exiled Heart, through a publisher, and the second one, Hunter Hunted, via indie publishing. I hope that these two are the start of many more via both routes.

I hope that my writing will speak to you and that you will learn something not only about your characters but about life as well.

Thanks for joining me today, Jennifer. To start with, let’s take a little ‘flight of fancy’. How would you finish these questions:

If I could visit any place in the world, I would visit…

One of the remote tropical areas.  I enjoy traveling to places that have warm, clear water like Hawaii and the Virgin Islands.  I know there are many other places like that out there.

A Basenji.  They’re awesome dogs.  Fancy that we have two of them.  They’re both sight and scent hounds, and I truly do wonder if they have hidden superpowers.

I guess they do have superpowers in a way—when you compare them to humans, anyway. And they’re cute!

If I could say one thing to my younger self, it would be…

Don’t be so locked into one career path.  When I was eighteen, all I wanted to do was to be an aerospace engineer.  I quickly found out that I don’t have the mindset for a PhD.  Later in life, I discovered that due to my singular approach to life, I’d passed up on several cool career opportunities.  Of course, back then, my younger self didn’t know what they were.

My ideal place to read would be…

What a great question!  I would love to read in a hammock on a tropical beach where it’s shady yet the breeze is coming off the water.  Then I’d nap, read, and then nap some more.

Okay, let’s get down to business. What draws you to the suspense genre?

I don’t consider myself to be a woman with typical feminine interests.  I think that goes back to growing up with a brother and two boys down the street.  Our play was football, baseball, and Star Wars figures.  I then went into a male-dominated college major and field.  I think my growing-up experiences also attuned me to enjoy reading in the suspense genre and then writing it.  I love novels that keep me turning pages.

I have plenty of typical feminine interests, but I’m with you all the way on keeping the pages turning!

You majored in physics and then went on to study environmental management. Does this expertise ever come in handy as a suspense writer, or is it just a good antithesis to all that high adrenaline action?

I think right now, it’s the antithesis.  I keep trying to figure out ways to work it in.  Maybe when I retire and I can write more freely.  However, I don’t know how I’d make water and sewer planning exciting enough to work into a novel.  😊

Lol! I guess you have a point…

What is Unit 28, and where did the idea come from for the Unit 28 series?

Unit 28 is a fictitious unit within the Department of Homeland Security.  Their task is to collect human intelligence in efforts to protect the homeland.  They also provide contract support to other, smaller agencies who might not have the manpower needed for intelligence gathering.

The idea germinated from the character of Alex.  She’s someone who loves her country and wants to serve, yet I didn’t want to place her within an existing agency such as CIA.  That led to the origin of Unit 28.

Can you tell us a little bit about Alex and Jabir?

Alex is a complex person.  She has Afghan blood in her, yet she grew up in the South because her father was from North Carolina.  Both of her parents noticed as she was growing up that she was an intense child, one who didn’t mind getting into scraps with the other kids.  She needed a firm but loving hand to discipline her.  Roya, her mother, watched her personality with both excitement and fear, excitement because Alex was turning into a very passionate young lady, yet fear because she knew the truth.  As a young woman, Alex has a wide variety of interests.  She loves hunting, carpentry, working out, and shooting, yet she also loves animals, kids, needlework, and hanging out with her girlfriends and family.

Jabir is as mellow as Alex is passionate.  He knows the value of family because it’s missing in his own life due to his parents’ torn marriage.  Deep inside, there’s some sadness that clings to him because he lost his sister, who was close to his age, while he was in college.  He’s found comfort in the friends he garnered through that experience, and he’s found that his newfound Christian faith provided the bedrock for him to get through that experience.  Very little shakes him or flusters him.  In many ways, he balances Alex by being so steady.

They balance each other out well.

Who is Hashim al-Hassan?

Hashim is a man with many bones to pick.  At the tender age of eighteen, he learned many of life’s harsh lessons by losing the one love of his life.  Since then, something broke inside of him.  He took vengeance upon those who killed his love.  When he lived in Iraq, he received the training that made him the man he is today.  Yet he also developed habits, two of which—women and night clubs—led to his downfall.  I detail the events of that day in Orb Web, a short story I wrote.  Having survived that, he again has a focus of vengeance against those who tricked him.

What’s one of the strangest things you’ve had to research for this series?

I think the one thing that was most interesting for me to research was actually for Orb Web.  I was trying to ascertain if Baghdad in 2007 had night clubs.  I got no dice on Internet searches, so I e-mailed one of my friends who grew up in Baghdad.  The funny thing is, the way he described the night clubs is exactly the way I’d envisioned them, something like a speakeasy during the Prohibition era here in the States.

Very handy that you had a friend you could go to. I guess the Internet has its limits!

What’s the most suspenseful thing that’s happened to you?

This is a hard one.  Honestly, I don’t think my life is that interesting, definitely not as interesting as Alex’s.  One thing that maybe could be termed as suspenseful that did happen was several years ago when our cars got broken into at our old house.  They dusted for prints and did the usual interviews.  I didn’t have any hope they’d catch the perpetrators.  But they did.  Fortunately, we didn’t have to go to court because the suspects had committed numerous break-ins, and the courts simply asked that we complete a form that went into the prosecutor’s case.  See?  Not the most interesting life.  😊

I’m not sure I could handle Alex’s kind of suspense in real life anyway! Maybe it’s better that way. 🙂

What’s next for Jennifer Haynie? Will we be seeing more of Alex and Jabir, or is there another story in the works?

Funny how I was just writing a blog post about this!  Yes, I do intend for the Unit 28 series to go on, though Alex and Jabir will be playing a more minor role.  I’ve actually introduced some characters who will be more prominent in Book Three and maybe Book Four.  And expect that things will take a bit of a darker turn for the whole unit.  We’ll see.

Thanks for taking the time to chat with me today, Jennifer.

Do you wish there was a little more suspense in your life, or are you happy to keep it between the pages?

1 Response to Interview with Jennifer Haynie