Welcome, book lovers! I have a special guest today: Dennis E. ‘Doc’ Hensley, the author of The Man Who Could Transfuse Time, which releases on 24 April 2018. You can read my review of the book here.

Dennis E. Hensley is the author of more than 60 books. He holds a Ph.D. in English and is a professor of professional writing at Taylor University. Dr. Hensley served in the United States Army and was awarded six medals for service in Viet Nam. He has been a Distinguished Visiting Professor at Oxford University and at York St. John University in England and at Indiana University and Regent University and other colleges in America. He and his wife Rose have two grown married children and four grandchildren.

He holds the power to make the young old and the old young again.

One night amid the tremors of death in the intensive care unit, Nurse Peggy Chandlar witnesses an incredible phenomenon that compels her to find out what really happened to Dr. Francis Anderson.

Ian Moore is pursued by those who would exploit his gift for their own selfish and destructive means. Hunted and threatened, he is forced to risk his life as time rapidly slips away. When the use of his powers gives Dr. Anderson new life, his years of hiding may have come to an end.

Haunted by the fear he will die before he can find someone worthy enough to possess the power of the gift, Ian sees only one solution. In a last, desperate attempt, he must risk a plan that will either bless or curse mankind forever.

Thanks for being my guest today, Doc. To start with, let’s take a little ‘flight of fancy’. How would you complete these questions:

If I was a musical instrument, I would be a…  guitar, because I have been a guitarist all my life and I feel one with this instrument when I am playing.  I love classical Spanish guitar music, country music, folk songs, classic rock tunes, and even some aspects of jazz.

Nice! I don’t mind a bit of classical guitar myself. 🙂 It’s a very versatile instrument, isn’t it?

If I was an animal, I would be a… turtle because whenever I wanted privacy, I could just pull in and be by myself.

And every introvert said, ‘Amen!’ 😄

If I could say one thing to my younger self, it would be… match real life experiences with your book learning. Travel, meet interesting people, work a variety of jobs, master numerous skills, and attempt things out of your comfort zone.  To be a writer, you know to experience life, not just read about it.

If I could be an Olympic athlete, I would compete in… fencing because I love movies with Zorro and the Three Musketeers and the Scarlett Pimpernel, all great heroes with a flashing blade.

I haven’t seen Zorro, but The Three Musketeers and The Scarlett Pimpernel are favourites of mine! And I’d love to be able to fence like the Man in Black or Inigo Montoya. 😉

If I could have one superpower, it would be… obviously, to transfuse time!

My ideal place to read would be… I am a pragmatic reader, so I listen to books on tape when I am driving in my car or walking on the treadmill. I carry paperbacks with me everywhere so that if I have to wait at the dentist’s office or the license bureau, I can always be reading.

Maybe if I got into audio books I’d do more walking. It’s a bit harder to do with a paperback or eBook!

Okay, let’s get down to business and talk about The Man Who Could Transfuse Time. Where did you get the idea for this story?

Some years ago I was hired by a major magazine to write an article in which I interviewed people who were born with superpowers they did not ask for, such as having perfect pitch or being ambidextrous or having a photographic memory.  Most told me that it turned out to be as much an annoyance as it was a blessing because it is hard to try to lead a normal life when you definitely are not “normal.”  These people are rare, but it made me wonder what it would be like to be someone who had a superpower that no one else had.

Later, I wrote a book on time management, and many folks told me they wish they could go back in time and be thirty years younger but know what they know now.  I speculated about that and wondered if it really would be good to have a young body with an old mind.  Then one night a pastor was talking about how each Christian has a spiritual gift, and in that instant all of these factors sequenced themselves in my mind to conceive the plot for The Man Who Could Transfuse Time.

Tell us a little about the world you’ve created for this story. In what ways does it differ from our world?

Actually, I take pride in the fact that I have positioned my characters in a setting that is somewhat contemporary.  My goal was to convince readers that this amazing individual could exist in a time and place they could relate to.  Although Ian Moore is unlike anyone else on earth because of his ability to transfuse time, he is as human as anyone else.  He walks, talks, eats, sleeps, reads, travels, listens to music, and watches television. What gives my story a special dynamic is that we have a totally “regular” human being who is put into a role that makes him need, at times, to be “irregular.” So, watching him decide when and how to step out of the routine of life is what makes readers captivated about what is going to happen next.

In the novel I explain that Ian was given his gift by someone who had the gift before him; and, now, Ian must pass it on to someone to use it after him.  I speculate in the story that this ability may have been handed down originally as a gene found in Adam and Eve, who would never have had to die if they had not sinned and been cast out of the Garden of Eden.  Ian can take hold of one person’s arm with one of his hands and take hold of someone else’s arm with his other hand, and he can take years out of one person and put them into the other person.  He transfuses time from one body to the other. The old get younger and the young get older.

What kind of rules and limitations govern Ian’s ability to transfuse time?

Ian has a high moral code.  He will never use his talent to earn money or to gain fame.  In fact, he does his best never to be discovered.  He evaluates specific opportunities wherein he can bless people by using his gift. For example, in one scene a baby has had a transplant, but unless the child can survive a certain number of weeks, it will die.  So, Ian takes time out of the mother and infuses it into the baby, causing the baby to grow, heal, and survive.  Naturally, there are unscrupulous people who would like to capture Ian and force him to make them younger over and over, which adds a great deal of plot tension to the novel as these people relentlessly try to locate and capture Ian.

Ian seeks someone who will understand that being blessed with a superpower is a great responsibility.  Using this ability to transfuse time must be done with discretion, discernment, wisdom, and also a great deal of stealth and cunning.  There is a tremendous joy in being able to use the gift to help people in need, but at the same time the possessor of this gift must remain humble, responsible, and judicious.

What was your biggest challenge with writing this novel?

I wanted the readers to believe that, even though this is an extraordinary plot, there is a basic logic behind it that makes it plausible.  To that end, I contacted geneticists and researchers at Johns Hopkins University and the Mayo Clinic and elsewhere, asking about information on the human aging process.  I studied the disease “progeria,” in which children age seven times faster than normal, and I used that scientific information as part of my plot.

Additionally, I interviewed esteemed theologians, seeking their views on why they think people are born with superpowers (ambidexterity, mathematical minds, photographic memories), and I also wove this information into the plot.  I did all I could to make this story seem realistic, believable, and modern.

What did you enjoy most about writing this novel?

I had great fun creating the witty dialogue between Ian Moore and Dr. Francis Anderson. The repartee they have as they wrestle with issues related to time, aging, death, the hereafter, and the meaning of life pushed me to my creative limits, and I reveled in it.  Additionally, I really got into the hectic pacing of the pursuit Ted Zimmerman engages in when trying to locate and trap Ian Moore. Those twists and turns, if handled well, keep readers turning pages, and that is one of my key aims as an author.

What do you want readers to take away from this book?

I believe that many people have a hard time grasping concepts such as being “born again” or having “everlasting life” or “entering eternity.”  By presenting a story that deals with both the science and the theological aspects of what time is, I hope readers will open their minds to the possibility that a higher being may have control over the past, present, and future.  I am not preaching to anyone in this book.  It’s a fast-paced thriller.  However, it is has an intelligent plot that stimulates the creative thought processes in readers, causing them to ponder higher matters of existence.

Thanks for joining me today, Doc! 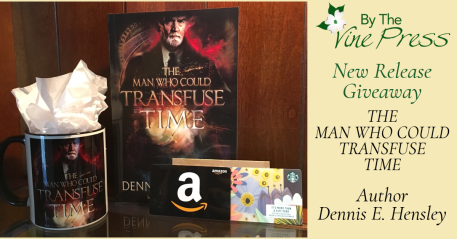