Thomas Fawkes is turning to stone, and the only cure to the Stone Plague is to join his father’s plot to assassinate the king of England.

Silent wars leave the most carnage. The wars that are never declared but are carried out in dark alleys with masks and hidden knives. Wars where color power alters the natural rhythm of 17th-century London. And when the king calls for peace, no one listens until he finally calls for death.

But what if death finds him first?

Keepers think the Igniters caused the plague. Igniters think the Keepers did it. But all Thomas knows is that the Stone Plague infecting his eye is spreading. And if he doesn’t do something soon, he’ll be a lifeless statue. So when his Keeper father, Guy Fawkes, invites him to join the Gunpowder Plot—claiming it will put an end to the plague—Thomas is in.

The plan: use 36 barrels of gunpowder to blow up the Igniter King.

The problem: Doing so will destroy the family of the girl Thomas loves. But backing out of the plot will send his father and the other plotters to the gallows. To save one, Thomas will lose the other.

No matter Thomas’s choice, one thing is clear: once the decision is made and the color masks have been put on, there’s no turning back.

Headmaster Canon opened the door to his private study, allowing me to enter first. Muted moonlight filtered through the rain-speckled windows across the room.
“Give us a moment.” He closed the door on Norwood, then lit a candle. “Without a mask, there’s no reason for you to continue at St. Peter’s.” Canon’s usually singsong voice came out monotone. “We cannot apply color training when you have no color power.”
“You want me to leave?” I croaked. I couldn’t leave with one year left—the final and most important year that resulted in an actual profession. The year I would hone my skill with the color of my choice—Grey—and maybe heal my eye. Despite the school and its dog-eat-dog students, I couldn’t be cast out now. I had a mere sixpence and shilling to live on.
Headmaster Canon hung his head and I caught a muffled sigh. “Only your father can carve your mask and pass on the color powers. Unless you can track down Guy Fawkes for a mask, you cannot be bound with a color.”
“Why cannot my grandfather pass on his color power? Or even Norwood?” My voice sounded shrill.
“It comes through blood, from father to son and mother to daughter. Denis Bainbridge is not your grandfather by blood.” He folded his arms as though steeling himself. “You no longer have a place in our society.”
I could not harden my heart fast enough to block the sting. Not just in the school, but in society.
I no longer had a purpose.
The servant in the entrance hall came to mind. Me—the son of Guy Fawkes and the grandson of the master and mistress of Timble Hall—maskless? Viewed as an orphan? Treated as an orphan? Not just that, but . . .
A plagued orphan.
They were casting me upon the street. No Fawkes had ever been maskless before.
I wouldn’t allow it. I would not be the first.
“You are welcome to remain for the graduations—”
“I will find him.” My voice emerged strong. Commanding. Like a Grey.
“I wish you all the bes—”
“Good eve, Headmaster.” I forced winter into my voice. I wasn’t in the mood to hear his well wishes when he was the one sending me from St. Peter’s.
I strode from the room and nearly plowed into Norwood. He gripped my hand in a firm shake.
A farewell.
I nodded, clenching my jaw, and then continued through the halls of St. Peter’s Color School. I would find Father. I would get my mask from him . . .
And then I would make him regret ever having a son. 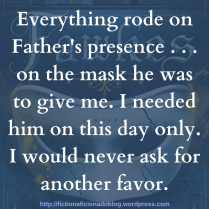 Reading this story was a venture into the unknown for this historical-fiction lover. I’ve read plenty of stories that played fast and loose with historical facts, but not a book that deliberately sets out to meld historical fact with elements of fantasy. In the case of the former, I’m definitely not a fan, but I found the treatment Nadine Brandes gave the story of the Gunpowder Plot intriguing. In many ways, it’s a coming-of-age story, with Thomas Fawkes—Guy Fawkes’ son—in the starring role. And it’s the combination of the historical plot (the Gunpowder Plot) and the fantasy element (the colour powers) that drives his character growth.

One of the most fascinating aspects for me was the way in which the colour powers (and the resulting philosophical differences between Igniters and Keepers as to how such colour powers were to be used) replaced the religious tensions that existed at that time in history. I don’t want to give too much away, but I especially loved the sassy voice of White Light—the source of all colours, and yet neither sought nor understood by Igniters or Keepers. In many ways, this element of the story distilled millennia of religious disagreement down to one essential problem: “Standing for my beliefs isn’t always the same as standing for truth.” A big part of Thomas’s growth is his gradual transition from fighting for what he believes in to seeking truth.

The complicating factor in all of this is Thomas’s relationship with his father. Despite never having really known his father, he is desperate for his approval—not to mention his father is the only person who can give him the mask that will allow him to bond with a color and finally exercise his own color power. But his father’s life is wrapped up in the Gunpowder Plot, a cause Thomas is less and less sure he believes in. It’s a tangled web of emotions with a sharply poignant conclusion.

The other character who deserves a mention here is Emma. The development of her friendship with Thomas enriched the story and provided a romantic element that was perfect for YA readers. And she ended up being my favourite character! She’s a strong, intelligent woman, despite—or perhaps, because of—the disadvantages she’s overcome. But I’ll say no more on that point!

My one complaint is that the pace of the story seemed to lag in places, but I would definitely recommend this story to historical fiction lovers who are looking for something a little different.

NADINE BRANDES once spent four days as a sea cook in the name of book research. She is the author of the award-winning Out of Time Series and Fawkes (July 2018). Her inner fangirl perks up at the mention of soul-talk, Quidditch, bookstagram, and Oreos. When she’s not busy writing novels about bold living, she’s adventuring through Middle Earth or taste-testing a new chai. She and her Auror husband plan to live in a Tiny House on wheels. Current mission: paint the world in shalom.