Dismantled centuries ago, the sword of Goliath is still rumored to thirst for its enemies’ blood. Cole “Tox” Russell only wants to begin his life with Haven Cortes, but he must first complete a final mission: retrieve that sword and destroy the deadly Arrow & Flame Order.

The AFO, however, is determined to claim the sword. Wielding their father’s life over Tzivia and Ram Khalon, they threaten to expose Ram’s long-held and dangerous secret while demanding Tzivia locate the sword. With the Wraith team slowly being torn apart, things only worsen when Mercy Maddox, a new operative, emerges with the stunning news that the sword is tied to both Ram’s secret and a string of unsolved serial murders.

Tox, Ram, and the others are forced to set aside fear and anger to focus only on the enemy. No matter the cost, Wraith must stop or take the enemy down with them.

Warily, Kazimir watched as the woman sat up, pressing a hand to her temple.
“Welcome?” she murmured. “Strange way to show it.” She staggered to her feet, wavered slightly, then straightened. “Give me my father.”
“That wasn’t the arrangement.”
She drew in a heavy breath, her chest heaving. Then another. “It was. My father for the artifact.”
Nur held out both hands. “I have no artifact, not even a third of it, which you promised to secure, so why would I give you anything, let alone your father?” His brow knotted, a darkness hovering there. “Where is the piece, Tzivia? You’re playing with your father’s life.”
“He’s dying down in that dungeon,” she said. She took a step closer. “Let him go.” She bent sideways.
Kazimir knew those moves. He’d seen them time and again. Her bargaining served as distraction.
After sliding a look to Kazimir—he anticipates her attack—Nur focused on the girl with a sad smile. “Now that, I’m afraid, I cannot do.”
She growled, her hands twitching. Kazimir inched behind her, grateful her attention and hatred were on his employer. Just a little closer . . .
Fiery brown eyes snapped to his. She bared her teeth. “Try me.”
Surprised and impressed, Kazimir froze. Though he stopped, he didn’t remove himself. He would not give her that satisfaction.
“The artifact,” Nur said. “Bring it, and I will consider releasing your father.”
“Consider—”
“You’re failing. Why would I keep my end when you do not?”
“Why do you care about this sword?” she demanded. “It’s just a sword. It might not even be—”
“No!” Nur punched to his feet. “It is the Philistine sword. It’s imperative that I find it. Time is not on your side, Miss Khalon.” He rounded the desk, apparently recovering his confidence. “Bring the first piece, and perhaps we can continue, despite your less-than-peaceful approach to these negotiations.”
“Negotiations? You’re selling his life!”
“I am,” Nur said, unrepentant. “But what price will you pay?”

I feel like I’ve just had the life drained out of me—although I’m pretty sure that’s just the adrenal letdown after finishing the most intense and epic conclusion to a series I’ve read in I don’t know how long. I know I’ve gushed about Ronie Kendig’s books before, but… Wowser! That was masterful. And brilliant. And…heartbreaking! But still right, somehow. And now I have to figure out how to function in the real world while I recover…

If you haven’t read the previous books in this series, I highly recommend doing so, (a) because it’s one of the best series I’ve ever read; and (b) because you’ll have a much deeper appreciation of the characters and their motivations as you come into this story. However, it’s probably fair to warn you that you will also be much more deeply invested in the characters, and, well, see first paragraph above. Tears will be shed, I promise you, because this author doesn’t shy away from hard reality, but you won’t be left without reasons to smile through the tears. 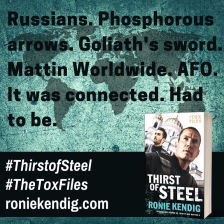 As far as the story goes, Thirst of Steel is Ronie Kendig at her brilliant best: The deep, robust characterisation; the complex, heart-pounding plot; the vivid, powerful writing; and, of course, the healthy sprinkling of one-liners and witticisms from the members of Wraith. As always, I take my hat off to Cell in that last department, but he definitely had some worthy competition in this one!

Thirst of Steel is paramilitary black ops that packs a punch both physically and emotionally, and throws in a dose of speculative archaeology for good measure. It’s 400+ pages of pure awesomeness, so just get it already!

Ronie Kendig is an award-winning, bestselling author of over twenty titles. She grew up an Army brat, and now she and her Army-veteran husband live a short train ride from New York City with their children and retired military working dog. Ronie’s degree in psychology has helped her pen novels of intense, raw characters.