Posted on August 8, 2018 by Fiction Aficionado

How can a wounded young woman ever trust a too-flirtatious earl with her heart?

With devastating scars in her past, Serena Winthrop is sure no man can be trusted—especially not a man like the too-smooth Viscount Carmichael. His reputation as a flirt and a gambler is everything she despises. And the young artist makes sure that this disreputable heir to an earldom knows of her deep disapproval whenever they encounter one another.

Henry, Lord Carmichael, is perfectly aware of his charms. He’s gambled with plenty of ladies’ hearts as easily as he has with their husbands’ money. But lately he’s wondered if there’s more to life—and if his actions might prove unworthy of an admirable wife such as his friends have found.

When Serena’s guardian asks his best friend to protect his young ward, Henry promises to be on his best behavior and not woo her. But the more he learns of her, the more he realizes she might be his best reason for changing his character.

Then the lady’s art leads her to London infamy. Now Henry must choose between the life mapped out for him as the earl apparent and the love of his life. And Serena’s secret may mean the end of his titled family line.

This second novel in a new series by internationally popular author Carolyn Miller is full of the rich historical detail and evocative writing her readers enjoy, and familiar characters make appearances here. The witty banter will continue to draw in fans of Jane Austen, Sarah Ladd, and Julie Klassen.

“Are you planning on studying your salmon remains all day?”
Harry lifted his gaze, met the mockery in his friend’s eyes, prompting his own ready spirits to push to the fore. “I have come to the conclusion—”
“Of your lunch?”
“That this salmon has had a hard life.”
“And a harder death. Do you always mangle your fish like that, or was it simply for my benefit?”
“I was unaware you were so sensitive to my fish-carving skills.”
“Or lack thereof.”
“Clearly your wife would do better to teach you to overlook such matters, rather than do whatever it is she is doing.”
Carlew’s smile grew knowing. “I quite enjoy what she is doing …”
“Enough! Is it not enough to know I shall be forced to endure the lovebirds a-twittering without being reminded as to the benefits?”
“You could get married yourself, you know.”
“So my dear father reminds me nearly daily. Which is why I’ll be so glad to visit you and be relieved of the burden of any such notion. Leg-shackled? Me?”
“You will fall for a young miss one day and I will enjoy your discomfort.”
Harry shook his head. “You forget I must marry to oblige my family. I cannot indulge the whims of the heart.”
“Love, real love, is not a romantical whim. It is a choice—”
“You make it sound so appealing.”
“A choice I gladly make every day, because I love Catherine, and wish to place her feelings and considerations ahead of my own.”
“Truly commendable, old man, but not something available for all. However, I can assure you of one thing.”
“Yes?”
“You need never worry about the fair Serena and my intentions.”
“Promise?”
“I will only ever be as a brother to her, of that you have my word.”
And he chose to ignore the faint mocking glint in the blue-gray eyes. Carlew doubt his word?
Well, this time he would keep it! 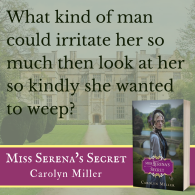 If you’re looking to be fully immersed in the Regency world for a few hours, then Carolyn Miller needs to be on your author radar. She captures everything I love about the Regency world in her stories—the manners, the settings, the pastimes, even the language—and often more besides. And I particularly love that her stories are grounded in everyday Regency life rather than focusing on the glitz and glamour of the London Season. Especially if it means we get to visit places like Welmsley Hall. If only I could actually see that view she describes!

As with all of Miller’s novels, this one has a strong cast of leading and supporting characters—some of whom are more likeable than others! (*cough, cough* Lily Milsom 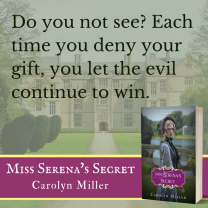 *cough, cough*) The eponymous Serena Winthrop—”she of the tranquil aristocratic countenance and flashing eyes”—is in some ways a paradox: forthright and refreshingly honest (some might say ‘pert’) in her opinions, and yet guarding several secrets at different stages during the story. But she was an easy character to like and sympathise with.

Henry was even easier to like, even if some his troubles arose as a result of his own poor choices (mostly in the past). As with some of Miller’s other novels, we get insight into the ‘working’ life of a British gentleman—in this instance, as Henry conflicts with his father over how to manage and prosper their estate. Over the course of the story, he transforms from a man who finds it “far easier to preserve his reputation as an amusing fribble or a capable 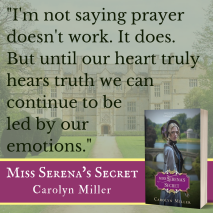 sportsman than be taken less than seriously for aspiring to be more” into one who is only too aware of his shortcomings and deeply desirous of changing. Add in a dose of dry, understated British wit, and you have a charming hero you can’t help but fall in love with.

Carolyn Miller doesn’t shy away from throwing a little drama at her characters, either, so expect a few curve-balls that force them to take stock and make some difficult choices. And fans of Winning Miss Winthrop will be pleased to know there’s plenty of Catherine and Jonathan here, not to mention a little teaser at the end that will whet your appetite for the final book in this series, The Making of Mrs Hale.

Another enjoyable excursion into the Regency world.

Read my review of Winning Miss Winthrop.
Read my interview with Carolyn Miller. 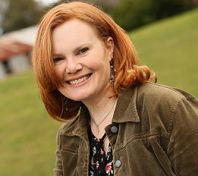 Carolyn Miller lives in the beautiful Southern Highlands of New South Wales, Australia. She is married, with four gorgeous children, who all love to read (and write!).

Her stories are fun and witty, yet also deal with real issues, such as dealing with forgiveness, the nature of really loving versus ‘true love’, and other challenges we all face at different times.