Posted on September 1, 2018 by Fiction Aficionado

Have you heard about the Once Upon a Laugh romance novella collection? It released in July this year, and is still available for just $0.99! Can you believe that? And not for just one novella, but eight! It includes a story from each of the following authors: Pepper Basham, Christina Coryell, Mikal Dawn, Heather Gray, Jessica R. Patch, Krista Phillips, Betsy St. Amant, and Laurie Tomlinson. And today, I’m going to be spotlighting two of these novellas for you!

She’s level-headed and ordered. He talks to imaginary characters. She keeps to the plan. He never has one. Will true love find a way to color outside the lines but inside God’s love to create a story they can write together? Four years ago, Jane Warwick escaped the shame of being jilted at the altar by becoming a housekeeper at the secluded Inn at Simeon Ridge. Predictable and quiet, the inn and large Simeon family help Jane find a place to heal but also cultivate her natural strengths for order and planning. But an unexpected visit to Bath, England, upsets Jane’s peaceful monotony and sends her out of her comfort zone, directly into the harrowing path of historical detective author, Titus Stewart. The only plans Titus sticks to are family holidays and the ones that send him careening into his story worlds, but when an uptight innkeeper stumbles into his life – and his latest novel – nonfiction begins to take on a much more interesting gleam. With the help of a mysterious journal, will they both uncover a romance that stands the test of time?

He couldn’t imagine Detective Miracle finding anything interesting about his newest romance. Well, except for those green eyes and long legs. But what did he know? He was just the author. The characters ended up doing what they wanted anyway.

“Here’s the truth of it, Jane. Someday you’re going to look back on your life and wish you’d taken a chance. The only way to become braver is to step out into what you fear.”

He just had to convince her that this fiction-loving Watson really needed her organized Sherlock…with a little romance sprinkled in.

First of all, she couldn’t believe he’d read female-celebrated classics like Austen’s or Bronte’s and second, that he argued their literary value for faith and romance? Who was this guy?

I have one word for you: Titus. You’ll fall in love with him the minute he steps on the page, and you’ll only fall harder the more you get to know him. From his imaginary friends (sorry, characters) to his obsession with Pink Lady apples and freckled shoulders, his spontaneity and complete unpretentiousness is utterly captivating. And when it comes to solving mysteries, he’s like a puppy begging you to come and play. You might grumble and try to resist, but there’s no chance you’re not going to cave.

Which is exactly why Jane Warwick ends up on the trail of her ancestor, Jane Ridley, wondering whether she ever worked up the courage to leave her privileged life behind to be with the man she loved. Jane is Titus’s opposite in many ways, but she blossoms as their friendship grows. Personally, I think you’d have to be dead not to bloom under Titus’s affection!

The romance is sweet, the dialogue is enchanting, and, well, Titus. He sells this novella all by himself, really! 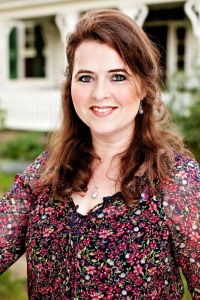 Pepper Basham is an award-winning author who writes historical and contemporary romance novels with grace, humor, and culture clashes. She’s a Blue Ridge Mountain native and an anglophile who enjoys combining her two loves to create memorable stories of hope. Pepper is also a mom of five, a speech-language pathologist, and a lover of Jesus and chocolate. She resides in Asheville, North Carolina with her family.

Ruth Erickson is good at crossword puzzles. Stupid good at crossword puzzles. It might even be her thing, if that weren’t a sad thing to claim as a thing. She would probably say her thing was taking care of her daughter, Emily, a spunky nine-year-old with a dog fascination. Maybe being a waitress, but she was mainly good at that in order to put food on the table and keep a roof over their heads.

In light of that knowledge about crosswords, it’s perfectly understandable why she freaked out when Tate Darrow started writing on her crossword puzzle at the café. Who does that? Besides, she didn’t know at the time that he’d taken a sabbatical from his job as a photojournalist to visit his ailing father. Certainly didn’t know that his sudden inheritance of a dilapidated mountain cabin and a moody dog had him out of sorts.
Love is definitely in the air. Puppy love—between Emily and the dog. Romantic love between Ruth and Tate would be infinitely more puzzling. And yet . . .

“The name’s Tate Darrow. I’m a photojournalist, most recently a war correspondent. Feel free to Google it so you don’t think I’m a psycho.”

“You’re a bit scruffier in person, which is amazing considering the fact that these last pictures are actually of you embedded in the desert. How do you look rougher in the quiet heartland of America than you do amongst the militia?”
“That enemy was less hostile.”

“It’s hot chocolate,” she continued.
His gaze ricocheted back to the mug, staring at that foam again. “Like a kid’s drink?”
“Yeah. You seem like you need a little reminder about the pleasant things in life, but don’t worry. It’s bittersweet dark chocolate and kind of salty, so it fits you.”

“Wow. That’s the most words I’ve heard you string together at once, and it only solidified the fact that you’re a grumpy old booger.”

I love Christina Coryell’s ability to create down-to-earth but slightly quirky characters. Tate Darrow not only crosses out (puzzle clues—much to Ruth Erickson’s horror) but IS crossed out. Well, he’s a grumpy old booger, at least. And maybe he has some valid reasons. But that doesn’t stop Ruth from sassing him out of his grumpy-booger shell whenever they run into one another. Or from discovering that grouchy and unattractive aren’t always synonymous…

This is exactly the sort of novella that hits my sweet spot. The dialogue is a gold-mine of dry, unpredictable wit, the characters are adorable—in a sassy/grumpy-old-boogerish way—and the romance is applied sparingly, but to great effect. I couldn’t ask for more in a novella!

USA Today bestselling author Christina Coryell was born and raised in southwest Missouri, where she lives with her husband and children. She had plenty of people tell her that her degree in English with an emphasis on Creative Writing would be useless. They were probably right. Added to her dual major in History, she became the least likely candidate for nearly every career on the planet, save being a writer. That suits her just fine.

Christina has written from the back hatch of an SUV, in a lawn chair while at soccer practice, in the front seat of her car, with kids climbing on her, and often with extremely loud noise in the background. At least half of her books have been written during baseball games.

She believes great fiction mirrors life, and great life contains a little humor, so it’s difficult not to sprinkle a little funny business throughout her work. Oh…and character is everything.

Have you picked up this collection of novellas yet? Do you have a favourite?