Posted on September 6, 2018 by Fiction Aficionado

When a vintner’s daughter travels to Bolivia to scatter her estranged sister’s ashes, she unravels secrets that test her devotion to home and make her question whether truth is worth the cost of forgiveness. Bittersweet and bold, Shadow Sister explores the mysteries of the human heart and the bond of unquenchable love.

The whole room smells of orange peel and furniture polish, evidence that Ana has been in here, preparing the room for Jenna’s arrival.
The prodigal daughter returning home.
To the equally proverbial delighted father.
Her insides lurch, signaling the familiar internal tug-of-war that begins whenever she considers the uneven tripod that remains of their family. Dad. Jenna. Herself.
Somehow, whenever Jenna is around, Sarah ends up the short leg.
What reason does she have to believe this time will be any different? Since Jenna called last week to request a plane ticket home, Dad’s been over the moon at the thought of seeing his beloved daughter again. Though Jenna didn’t give any hint of her long-term plans, he’s already asked Sarah to include her in the upcoming Harvest Festival. He could hardly stop smiling in anticipation.
A qualm settles in Sarah’s stomach as she wonders again why her sister is breaking her self-imposed exile—and what it might mean for her. Will this be when she knows at last that Jenna has forgiven her? She presses a hand over her heart, as if to relieve the ache that throbs beneath her skin whenever she thinks about Jenna’s leaving. Will the sting of rejection ever fade?
A breeze ruffles the sheer drapes framing the window, drawing her attention once more to the vines awaiting harvest. When Mom was alive, she liked to say that each bottle of every vintage had its own unique character. The amount of sun and rain in any particular season gave grapes an indefinable quality, a goût de terroir, the taste of the land. No other grapes in the world tasted the same, and thus, no wine did either.
She also said the best wines, like the truest, noblest characters, were produced under stress. Pamper a vine and you’d get a soft grape: flabby, without the necessary acid to form the backbone found in the best wines. On the other hand, too much deprivation led to death. But the right amount of drought, when the vine had to cast its roots down … down … summoning all its strength and will to survive—those vines were capable of creating a wine able to hold its own among the finest in the world.
Sarah sighs, her heart squeezing again. Probably a good thing Mom didn’t live to see what happened between her and Jenna. How the cord of family loyalty that bound them from childhood began to fray soon after Mom died. Then snapped completely when Jenna left the vineyard for Bolivia six years ago, an absence broken only once, two years later. Mom would have grieved to know they’d hardly spoken in all that time.
It doesn’t have to be this way. Not anymore.

This was a bittersweet, but thoroughly engrossing story—my first by Katherine Scott Jones, but not my last. It’s a story of sisters and families, of dreams and regrets, of love and loss, and of shadow and light, and I loved the way these contrasts were constantly in tension throughout the story. 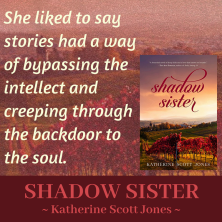 The opening chapter packed an emotional punch that pulled me firmly into the story, and the second chapter only cinched its grip. That there were misunderstandings between these formerly close sisters was obvious, and it was the work of this story to unravel those misunderstandings, both for Sarah and the reader. It painted a very clear picture of the way in which our insecurities can colour our relationships and erect barriers between us and those we love most, and it played with the metaphor of shadow and light and the way these elements can influence our perspective, hiding or illuminating the truth. 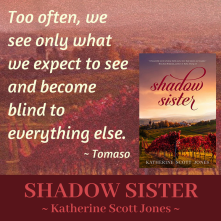 Sarah’s chapters were narrated in the third person present tense, which is my least favourite point of view, but it couldn’t prevent me from becoming immersed in Sarah’s journey as she travels to Bolivia and meets the people her sister lived and worked with. Her discoveries there don’t just lead her to contemplate her relationship with her sister; they cause her to re-evaluate the course her life has taken since a skiing accident several years ago. And there’s a nice little bit of romantic tension added into the mix, too. 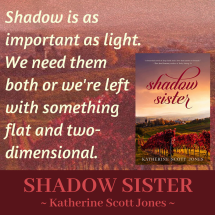 Interspersed with Sarah’s story were chapters that jump back a little in time and share Jenna’s side of the story through some of the key moments that influenced her relationship with her sister and the direction her life eventually took. And yet, even when everything was finally brought (very satisfactorily) into the light, there was still the bittersweet shadow of knowing that Jenna had not lived to experience the restoration of her relationship with Sarah. But as their mother once said to Sarah as they painted in her studio: “Remember, Sarah, shadow is as important as light. We need them both or we’re left with something flat and two-dimensional. Dull. But when we bring them together, shadow and light add depth. Interest. Life!”

Katherine Scott Jones grew up in cities on every U.S. coast and overseas as her family moved with her father’s Navy career. Seattle became home when she married her husband twenty-eight years ago. After graduating Whitworth University with a degree in communications, she established herself as a freelance writer before turning her hand to fiction. She blogs about books that celebrate beauty at www.katherinescottjones.com. Katherine and her husband have two teenage children. Shadow Sister is her second novel.

Much as I love a good movie, my favorite part often comes at the end when the director includes outtakes—those false starts and bits from the making of the movie that wind up on the cutting room floor.

In a similar vein, I’m going to let you in on some of what went into the creation of my novel, Shadow Sister, but did not make the final cut.

Shadow Sister is a work of inspirational women’s fiction with a global accent—written for women with a heart for complex relational issues as well as a passion for biblical justice. It is the story of a vintner’s daughter who travels to Bolivia to scatter her estranged sister’s ashes. There, she unravels secrets that test her devotion to home and make her question whether truth is worth the cost of forgiveness. Shadow Sister explores the mysteries of the human heart and the bond of unquenchable love.

Now that you know a bit about what it is, come along as I pull back the curtain and share an exclusive peek at what Shadow Sister is not.

It took me a while to finally land on the right title. Early contenders:

– The Sweetness of Light

– Variations on Shadows and Light.

It also took a bit of experimenting before I found the right combination of people and places:

– Sarah, the main character, was originally a marine biologist. I first imagined the story set in Seattle before moving it to the fertile plains of Eastern Washington wine country.

– Sarah was originally engaged; and Chase and Rachael were involved.

– The gender of Matilde’s baby changed from what I first plotted. That simple switch got me unstuck from a perplexing snag of writer’s block.

– Nicole, Stasi, Rees, and Stephen were all main-character names I considered and rejected.

– Sassy Britches is named after an actual racehorse by the same name.

Of course, story exploration turned up far more tidbits of interesting info than I could possibly fit into the pages of a novel! Some of what I wished I could have used…

– Drinks:  While the traditional Bolivian beverages api and mate de coca are featured in Shadow Sister, several others are not:

– Language:  Spanish, Aymara, and Quechua are Bolivia’s three national languages, and they differ from each other greatly. For example, the number one in Spanish = uno, Aymara = ma, Quechua = hoq.

– On wine: “Wine is sunlight held together by water.” ~ Galileo

– On art: “Art enables us to find ourselves and lose ourselves at the same time.” ~ Thomas Merton

I hope this glimpse into what didn’t make it onto the pages of Shadow Sister piques your interest for discovering what finally did! 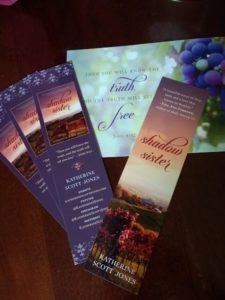 To celebrate her tour, Katherine is giving away a grand prize that includes a personalized signed print copy of the book, a Shadow Sister bookmark, a Frame-able print, Book-lover’s tea, 6 Handcrafted notecards, and a set of vineyard-themed playing cards!!

Be sure to comment on the blog stops for nine extra entries into the giveaway! Click link below to enter. https://promosimple.com/ps/d25f/shadow-sister-celebration-tour-giveaway

14 September ~ The Midnight Bookaholic  //  Pause for Tales  //  The Mimosa Blossom