Posted on November 10, 2018 by Fiction Aficionado

An emotional novel of family, friendship and forgiveness from Courtney Walsh, the New York Times bestselling author of Hometown Girl.

Lyndie St. James is thrilled that her best friend, Elle, is getting married but unprepared for the emotional storm of the wedding week and returning to her childhood summer home of Sweethaven. The idyllic cottage community harbors some of her best—and worst—memories. It’s not only the tragic death of her childhood friend Cassie that has haunted her for ten years, it’s the other secrets she’s buried that have kept her from moving on.

But Lyndie isn’t the only one with secrets.

Cassie’s mother, father and brother, still struggling with the loss, have been drifting further and further apart. And Elle herself, the last to see Cassie alive, carries an impossible burden of guilt. Now reunited, each of them has a choice: to reveal the truths of that night or continue to live in its shadow. That means embarking on a personal journey of the heart—to escape the darkness and all its regrets and to finally come to terms with the past and, especially, with each other.

“First time back?”
The voice came from behind her, and while she couldn’t see the man who’d asked the question, she recognized the voice.
Ten years later, and it could still stop her heart.
Tucker.
He didn’t wait for her to turn, but came up to the water, next to her.
His shoulder brushed against hers.
She was instantly eighteen again, unable to stop the onslaught of nerves.
She dared a glance. He stared down the shoreline in the opposite direction, giving her time to study him unnoticed. He wore a faded gray T-shirt and navy-blue board shorts. He still had that same sandy-colored hair, though he wore it longer now, and his face was a little fuller than back in those days, looking less like a boy and more like a man. His skin was bronze, the way Cassie’s always was in the summer. He practically glowed. Somehow the years had only made him more attractive.
Unfair.
He glanced back at her, probably wondering why she hadn’t responded.
The eyes—steel blue with flecks of gray. No wonder she hadn’t said a word. How could she?
“Hey.” He was tall, study, strong. Lyndie wondered what it was like to be any of those things. Her strength had always been a front. Anyone could see right through it if she let them get close enough to her. She never did.
“I didn’t think I’d ever see you again.” She stared in front of her, eyes locked on a small boat in the distance.
I didn’t think you ever wanted to see me again.
“Wanna swim?” he asked.
She shook her head. “My suit’s in the car under a whole lot of junk.”
Besides, swimming felt so . . . carefree. She didn’t.
“You’re missing out.” He pulled off his T-shirt, and Lyndie did her best not to stare. She failed.
“Where’d you get all those?” She pointed to his stomach.
“All what?”
“All those . . . abs.” Lyndie felt a blush rise to her cheeks as she realized what she’d said. What did she think, there was an ab store out there where you could go in and pick up a six-pack?
He grinned. “Last chance.”
She gave her head a slight shake. “Another time.”
He kicked off his flip-flops and ran a hand through his hair, its unruly natural state suiting him well.
And as he jogged into the water, he took her resolve right along with her.
Suddenly, detaching felt like a pipe dream.

This was an emotional read, and a difficult one at times for me. I am NOT the kind of person who can hold big hurts close to my chest like these characters. Perhaps I was just blessed in having a mother whom I could confide in, no matter what; perhaps I’ve been fortunate in not having experienced situations like the ones these characters have experienced. Whatever the case, I’ve never managed to carry the burden of guilt for very long, and so to spend a whole novel with characters struggling under ten years of its accumulated weight? Yeah, it was a bit tough for this cookie. I was very keen to get to the resolution so I could breathe freely again!

But one of the things I love about fiction is the way it allows me to experience life from a different perspective—one completely outside my own realm of experience—and unlike other novels where lack of communication can be downright irritating, I felt the honest struggle of these characters, even if there was a part of me that kept saying, “If you would just talk to someone about it . . .” It may not have been the way I would have responded, but it was very believable (and understandable) that these characters had held their secrets close the way they did.

There were a few times in the first half of the novel where the story felt a little slow and the characters’ inner narratives a little repetitive, but I couldn’t help but be drawn into their story. Through the four point-of-view characters, we get to experience a range of struggles, from perceived guilt and intense regret through to grace and forgiveness, and from the shame that holds us back from being fully known to the freedom and joy that comes from allowing those we love to see all of who we are—the best parts and the worst parts—and love us in spite of ourselves.

Definitely an emotional read, but also a rewarding one. 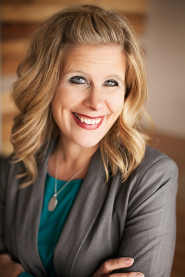 Courtney Walsh is a novelist, artist, theatre director, and playwright. Just Let Go will be her eighth inspirational romance novel. Her debut, A Sweethaven Summer, hit the New York Times and USA Today e-book bestseller lists and was a Carol Award finalist in the debut author category. A creative at heart, Courtney has also written two craft books and several full-length musicals. She lives in Illinois with her husband and three children.