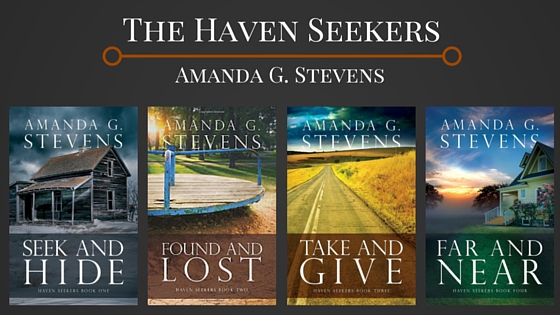 This is a series that really needs to be read chronologically, but it is well worth the investment of your time.  It is superbly written, and its characters are some of the most authentic, memorable, and well-drawn characters I have ever come across.

The premise of the series is deceptively simple: in the US, ‘archaic’ Bibles have been banned for inciting violence and hate speech. The only Bibles now permitted are the government-sanctioned Progressive United Version.  Likewise, Christianity is outlawed, and it is the job of the Philosophical Constabulary to apprehend and re-educate anyone who continues to practise or preach Christianity.

Marcus Brenner is relatively young in the Christian faith, but he becomes the unintentional leader of a resistance movement against the Michigan Philosophical Constabulary when he begins assisting targeted Christians to hide or flee from imminent prosecution. Lee Vaughn is his best friend, a deeply wounded woman who cannot understand why people would put such unfailing trust in an all-powerful God who does nothing to prevent evil. Yet she supports the resistance movement by providing covert medical assistance to Christians, who are unable to access medical insurance or hospitals as a result of their beliefs.

Violet DuBay and Austin Delvecchio are the other primary characters in this series, although they don’t enter the story until the second book (and Austin isn’t a major character until the third).  Both are fully convinced of the truth of the anti-Christian rhetoric propounded by the state. Violet betrays her defacto family in the name of upholding the law, never imagining the far-reaching consequences of this decision. Austin Delvecchio is one of the youngest recruits on the Michigan Philosophical Constabulary, until he makes a choice that angers his boss, endangers his life, and forces him to flee with the very people he once hunted.

As a result of the increasing powers granted to the Philosophical Constabulary, Texas secedes from the United States and become a Republic in its own right – and a safe haven for those fleeing the long reach of the Constabulary, including this unlikely quartet of philosophical refugees.

But these characters are not just on a physical journey. They are also on an emotional and a spiritual one, each grappling with their own demons, and seeking understanding – what is the Truth about God? Why wouldn’t a loving God prevent evil from happening?  What does God require of them?  These characters do not ask easy questions, and neither are the answers necessarily easy, but life has given them every reason to seek them.  Participating in their journeys makes for one of the most compelling series I have read.  The issues are handled with a depth and clarity that is not often seen in fiction writing, and the strength of the writing is simply the icing on the cake.

To sum up, I’m not sure there’s an adjective that accurately describes how I feel about this series.  It seems shallow and somehow misleading to say I ‘enjoyed’ it, because it is not a light read.  I was gripped . . . fully immersed . . . engrossed . . . consumed . . . stunned . . . I loved it. I cried, I smiled, I held by breath, and I kept swiping my Kindle at the end as though that would magically deliver more pages of a story that I wasn’t ready to finish.

On her own website, author Amanda G. Stevens describes what keeps bring her back to an author:

I love sensing the author knew the characters first, before the plot or the storyworld. I love sensing the author knows more about the characters than he’s going to tell me in this book. I love deep point of view. I love realistic, human dialogue. I love prose with a voice (I can’t define “voice,” but when I read a good one, I latch on with giddy loyalty). I love characters with individualizing details. I love being trusted to understand the themes without the author’s assistance. And (believe it or not) I love word economy.

And there you have Amanda’s writing style, summarised in her own words.  This could very well double as my explanation for why I will come back to Amanda Stevens’ writing again and again.