Posted on December 5, 2017 by Fiction Aficionado

Ahh… Bookish settings. Is there ANY book lover who, at some time in their life, has not wished with everything in them that they could visit the world of the book they’re reading. I was particularly susceptible to this as a child, and haven’t fully outgrown it yet! So, many thanks to the girls at The Broke and the Bookish for suggesting this topic for today! 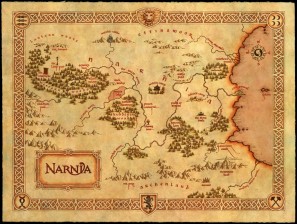 Hand up if you ever wanted to visit Narnia as a child? *raises both hands* I actually prayed about it at one point. My reasoning was that if God could do anything, that would include sending me to a completely fictional world. I have a feeling He still smiles at that memory. 🙂

If you know me, you knew this would be the second place on my list. Aside from Narnia, Prince Edward Island is the place I most longed to visit as a child. At least it was a real place! One day I’ll get there…

, but I have always wanted to slide down the huge slippery-dip running from Moonbeam’s house down the centre of the Faraway Tree. And I wouldn’t mind trying one of Silky’s pop-tarts either!

What Austen-lover wouldn’t jump at the chance to escape into Austen’s world? In this story, the protagonist agrees to accompany her friend to an estate home that offers visitors the complete Austen experience: costumes, meals, activities, and so on. I would SO be there!

Ever wondered what it’s like in Santa’s world? Here’s your chance to find out. I especially loved the idea of the Christmas town of Flitterndorf being lit by streetlamps 24/7 as the sun disappears below the horizon

for a whole month. But the flying reindeer were pretty cool, too! 🙂

The setting is always an extra character in Mary Stewart’s novels, and I could have picked any one of several of her books to feature, but there’s not much can beat relaxing on a Greek island. Not that her protagonist is really able to relax at first . . .

There’s something irresistible about Melissa Tagg’s fictional town of Maple Valley, Iowa. It’s welcoming and homey, and they know how to put on an event! Quintessential small-town America.

They might be practically our nearest neighbour (and my mother-in-law’s native country as well), but I haven’t visited this picturesque country yet. It’s definitely on my bucket-list, though, and I’d be keen to add in a few of the Middle Earth attractions while I’m there. Although, maybe I’ll draw the line at dressing like a hobbit . . .

The World of Vaudeville (1920s Boston)

To be honest, I really wanted to put The Ringmaster’s Wife (also by Kristy Cambron) on this list,

but it was on an earlier list of unique settings that I did for a Top Ten Tuesday post, and I’m trying to not duplicate too many. So I went with this one instead. They’re both fabulous settings, but I love the mystery surrounding Wren Lockhart, and her performances were spellbinding.

Mt. Rainier National Park is definitely a character in its own right in this novel.

One I would love to meet in person, even though I finished reading the novel feeling as though I had climbed Mt. Rainier myself!

Which bookish setting would you really like to visit?