The Hidden Side (Heidi Chiavaroli) – Review

New York, 2016
Natalie Abbott offers answers for hurting listeners on her popular radio program. But she struggles to connect with her teenagers, with her daughter in an unhealthy relationship and her son uncommunicative and isolated. When one member of the family commits an unspeakable act, Natalie is forced to uncover who she truly is under the façade of her radio persona.

New York, 1776
Mercy Howard is shocked when her fiancé, Nathan Hale, is arrested and hanged as a spy. When she’s asked to join the revolutionary spy ring in Manhattan, she sees an opportunity to avenge Nathan’s death. But keeping her true loyalties hidden grows increasingly harder as the charming Major John Andre of the King’s Army becomes more to her than a target for intelligence.

Mercy’s journals comfort Natalie from across the centuries as both women struggle with their own secrets and shame, wondering how deep God’s mercy extends.

“What happened?” Mike kept his distance.
“Why don’t you ask your freak-of-nature son?” In a sudden movement, she pushed off the wall and started up the stairs, her chemistry textbook still clutched against her chest.
“Maelynn! Maelynn, get back down here.” Mike’s command was ignored.
“Let her go.” I spoke soft enough for only Mike to hear.
“Let her go? Did you smell that? I’m not doing drug busts at the school only to have my own daughter come home smelling like weed.”
I looked up the stairs, waiting for the sound of her door to shut, but all I heard were muffled voices. “She’s upset. Let me talk to her.”
Mike’s fists clenched.
What did a good parent do in this situation? I imagined Skye behind the microphone of the radio station, headphones on, listening to a caller emptying her heart out to me and my cohost, Tom, regarding her drug-addicted daughter. It didn’t happen often, but when it did, I made it my goal to offer hope. A hope greater than drugs, a hope greater than high school popularity, a hope greater than this world or ourselves. How did I always seem to find the right words on the air but come up short with my own family? How could I persuade my listeners that all would be okay in the end, but fail again and again to grasp it in my own life? And if I, the dispenser of advice, found these words hollow when I truly needed them, how much good could they have done for my listeners in their own times of trial?
I trudged up the stairs, the rubber soles of my slippers quiet on the hardwood. I strained to hear Maelynn’s strident voice above. As I reached the landing, I crept close to the wall, a snoop for the second time in one day in my own house. It sounded as if she was in Chris’s room.
“I want you to leave me alone. Seriously. Stay out of my life, okay?”
Silence.
“Okay?”
I took three steps closer.
Then, the low voice of my son. He’d hit puberty late, and I still couldn’t get used to the manly voice—one I didn’t hear enough. “He’s no good for you.”
“Who are you to tell me who’s good for me? You don’t have a say; do you get that, Chris?”
“I’m glad you broke up with him.”
News flash. Wow, big news flash. And I couldn’t say I wasn’t happy. Jake Richbow was an all-American boy—good looks, starting wide receiver of the football team, bright, polite, attended church with his parents often enough . . . and yet something about him made my skin crawl, just below the surface. Like I couldn’t trust him. Like Jake Richbow didn’t have one authentic bone in his body.
A long sigh from Maelynn. “Look, I love you, okay? I wish you were more . . . I don’t know . . . normal, but I love you. But you have to get one thing. We shared a womb. That’s it, Chris. We don’t share this life. I might have stuck up for you today, but don’t count on me to do it again.”
Maelynn stormed out of Chris’s room and toward her own, farther down the hall. I leaned my head against the wall. Things were so much easier when they were five, and my biggest problem was who got to play with the newest Play-Doh container.

Taken from “The Hidden Side” by Heidi Chiavaroli. Copyright © 2018.
Used by permission of Tyndale House Publishers, Inc. All rights reserved.
https://www.tyndale.com/p/the-hidden-side/9781496423238 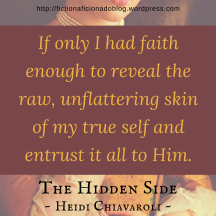 This is one of the most heartbreaking books I’ve ever read. If I hadn’t been at my daughter’s ballet class when I finished reading it, I would have been a blubbering mess throughout its final chapters. In fact, I probably wouldn’t have been able to read the words at all, so perhaps it was better that I was somewhere I was forced to restrain my emotion! As it was, I still had to go digging for a tissue to surreptitiously wipe the tears that kept blurring my vision before streaming down my face. And yet, through that crippling heartbreak (I say crippling, because I have never had a book affect me so viscerally before) there is such a beautiful picture of our refuge in Christ.

The story is related from three different points of view: in the contemporary story, it’s Natalie Abbott and her daughter Maelynn who share the narration, while in the historical story, it’s Mercy Howard. Each of these women are hiding in different ways. In Mercy’s case, the hiding is a deliberately cultivated choice—essential to her success as a spy. For Natalie and Maelynn, hiding is an instinctive response to shame and brokenness. 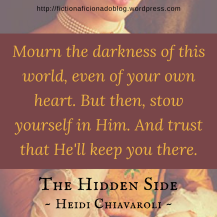 It’s difficult to imagine a plot that would resonate with readers more than the contemporary plot in this book, but I’m warning you: it will take you to one of the most emotionally difficult places you could possibly go. Which is exactly what makes this such a powerful story. It not only shows a side of tragedy that most of us would give little thought to, but it portrays a convincing and utterly compelling journey from hiding in brokenness to hiding in God.

I was so firmly in the grip of the contemporary story that the historical story felt like an interruption at first, but it became a compelling story in its own right as it developed. It was the perfect complement to the contemporary story, showing in a very literal sense the kind of bondage that comes with hiding our true selves.

I’m of one mind with C.S. Lewis when he says, “Don’t use infinitely when you mean very; otherwise you’ll have no word left when you want to talk about something really infinite”, but this novel deserves all the positive superlatives I can come up with. Every single one of them would be justified.

Heidi Chiavaroli is a writer, runner, and grace-clinger who could spend hours exploring Boston’s Freedom Trail. She writes Women’s Fiction and won the 2014 ACFW Genesis contest in the historical category. Both her debut novel, “Freedom’s Ring” and her sophomore novel, “The Hidden Side” are Romantic Times Top Picks. “Freedom’s Ring” was also a BOOKLIST Top Ten Romance Debut, 2017. She makes her home in Massachusetts with her husband, two sons, and Howie, her standard poodle.

11 Responses to The Hidden Side (Heidi Chiavaroli) – Review